Police brutality occurs worldwide; police officers are often attacked because of media coverage and personal bias. Vigilante citizens make it their business to punish officers for stories the media covers. They don’t believe that trials conducted were fair to the citizens who were hurt and decide to take punishment into their own hands.

Most people discriminate against the police community, however, the media does not expose us to the good police officers in our community. Think about the cases you hear in the media, most of them are wrongs against young African-American men. The spin that the media places on the story leads people to assume that this is the norm, when it is not the case.

Officers should be recognized for their kind acts since they do a lot for our community. They all do not deserve to be discriminated against because of the few corrupt officers. Many officers join the field to “protect and serve.”

“I think that the media should highlight the positive side of police officers because if the police are showing the negative they might as well show the positive. People already have a lot of issues regarding police behavior around civilians so showing their good side will help people feel safer,” said Ayushi Shah, senior at Thomas Edison high school.

The local media covers stories when individuals are either brutalized or harmed by the police. This is most likely because these frequently sensationalized cases are what readers and viewers want to hear.

“Right now, the media portrays police as brutal, heartless, and racist individuals. From my perspective, the media isn’t portraying the police as they should. Most often the media manages to highlight the wrong aspects of police activity. When should highlight the good and the bad,” said Shazid Baksh a senior student at Thomas Edison.

It’s coming to a time where we should hope this topic is kept serious concepts opposing and self-serving politics from all sides.

According to the New York City Patch, “… the law enforcement world has been a target. Today, our law officials are standing up and making a change not only for our police officers but also our communities and their citizens. This is an important day, this is an important message to the world, that BLUE LIVES MATTER!” 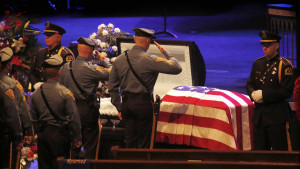 Hi, my name is Rachel Rasul. I chose to write for this section because I am a very opinion based person. I feel everyone has a right to express their opinion. Also, sometimes it takes one person openly expressing their opinions for more people to get involved on the topic. I’m the type of person to express my opinion about how I feel based on how what I may see or hear affects me personally or the world around me. In a way, I always have to speak my mind.