The Grammys Awards is a night when outstanding music throughout the year is celebrated. On February 12, 2017, the Grammys took place at the Staples Center in Los Angeles. This year, powerful performances from Adele, Beyonce, Bruno Mars, Lady Gaga, Madonna and much more left many viewers in awe of their skills. However, the best performances of the Grammys can still be argued by viewers. 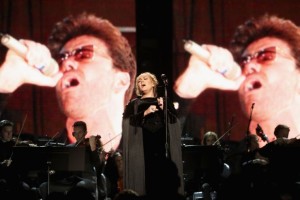 Beyonce performing “Love Drought” and “Sandcastles” was what everybody was talking about during and even days after the Grammys. Beyonce’s beauty and voice also captured the heart of viewers. Junior, Raisa Iqbal stated, “I thought Beyonce’s performance was amazing. She is so empowering especially for women and people of color. She wore a gold dress that portrayed her as this goddess. She’s pregnant and the fact that she still performed showed what a queen she really is.The performance had such a deep message. I loved her visuals and how she incorporated her mom and daughter Blue Ivy.”

Adele’s performance of “Hello” on the other hand kick started the Grammys off. Viewers like Raisa were initially shocked that she started the awards show. Adele performed “Hello” which was a big hit of 2016 but many people thought that she would have performed it later in the show. Adele surprised the audience while performing “Fastlove” (a tribute to George Michael) when she “messed up” and had to start over again.

Ed Sheeran and Beyonce were two of the night’s best acts according to Hana Elwarari, a member of Edison’s chorus- The New Approach. “I’m a huge fan of both artists and it was a big night for both of them. For Ed Sheeran, it was his comeback after a break and the fact he was mixing the music live was really cool from a musical standpoint. For Beyonce, even now being pregnant gave a performance that was beautiful to watch and stuck to the aesthetic of her album,” Hana stated.

The 59th Annual Grammy Awards were a success and were overall enjoyable for all music lovers. Beyonce, Ed Sheeran, and Adele’s performances were the most memorable for many viewers. For many, these artists struck the note. Fans of these popular artists were pleased and amazed at the high energy of each of the performances.

My name is Gurneet. My hobbies include listening to Kpop as well as watching makeup tutorials. I write for the Arts and Entertainment section of The Edison Light because of my love for movies and music.