The hot, dry weather in Australia makes it easier for forest fires to start and spread. About 25 people have died and more than 2000 homes burned this year due to rising temperatures and strong winds. But the main concern is the animals. Over half a billion animals have been affected; some of them including koalas, kangaroos, and possums whether it’s major injuries to the lost of their homes.

There have been hundreds of volunteers doing anything they can to help these animals. Micah Lovegrove and his family took any koala that was unresponsive and gave them to a neighbor who is certified in wildlife protection.

The Irwin family is famous for their love of animals. The father of the family, Steve Irwin, has had his own show called the Crocodile Hunter in the early 2000s. He had passed away due to a stingray injury, however in order to keep Steve’s legacy alive, his family has done whatever they can to help animals everywhere. They have been taking care of animals affected by the fire by providing them with medicine and shelter. The animal hospital that they own has saved more than 50,000 animals since the fires have begun. 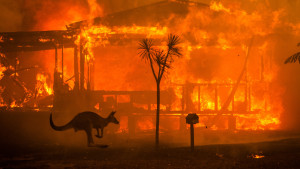 Because of the increasing fires, animals are losing their homes and suffering injures
Photo Credit: Matthew Abbott for The New York Times

“Forest fires have been a problem not just in Australia, but in California as well,” said Thomas A. Edison CTE student Kaitlin Romeo. “People don’t realize that animals are also in danger, they just focus on the human lives lost. I think that these fires have brought many people to a realization that ‘wow these animals don’t have homes now. This is not okay. We need to do something; whether it’s an actual donation or a simple repost.’” “Social media does this thing where for every repost or every like, the account donates a dollar towards a certain organization, which makes it easier for those who can’t donate to help in some other way,” said Romeo.

In order to raise awareness and to donate, social media has displayed images of animals with burns and having no home. Several celebrities have promoted organizations that would provide homes to the homeless koalas. There are various places, such as Wildlife Warriors, the Red Cross, WIRES, where you can donate today.

Other countries, such as the United States and Canada, have even sent firefighters to help put out the fires in Australia. This isn’t the end of the fires. The summer season has just begun, which means these fires could go on until April. But if everyone can donate whatever they can, you would be helping those who have suffered to recover from the fire.

Hi, I’m Ria Varghese. I love to travel, hang out with friends, try new foods, and watch my favorite shows.