New York City subway riders are likely to face fare hikes following the commencement of the MTA’s new subway rescue plan. This new subway rescue plan was set to provide solutions for “steady deteriorating service” and “included at least 30 separate measures to address the major problems plaguing the system, including antiquated signals and subway fires, and called for hiring 2,700 new workers,” according to Joseph J. Lhota. With these ambitious new plans, the problem that arises with it is: how will the 836 million dollar plan be paid for? 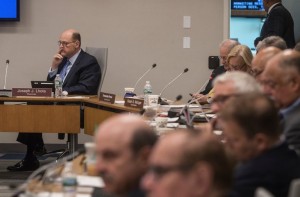 Jospeh J. Lhota, chairman of the MTA, during a board meeting in July
Photo Credit: Victor J. Blue

This past July, a board meeting was held to discuss ways in which the plan would be paid for. The solution that some have come to was to stay with a fare increase of 4% every other year. The last fare increase came this March when the price of a weekly MetroCard rose $1 to $32.

Some board members shared the same sentiment that many riders would have if the fares were to continue on their biennial hike. According to Andrew Albert, “If you take these to their logical conclusion, at some point, the fare will be $10 and tolls will be $50, and I’m not sure that is sustainable.” Due to this fear, Lhota has been looking into other avenues for acquiring the payment of the project. Lhota is also pressing for Mayor Bill de Blasio to pay for half of the 836 million dollar plan. Governor Cuomo has agreed to pay for the rest, but de Blasio has made it clear that he will resist giving the MTA any more money. The board of Directors has ultimately agreed to postpone raising the fare pricing from 2019 and 2021.

Many common MTA passengers also share a lot of skepticism for how the MTA will go about fare hikes. Richard Dookeeram, a teacher at Thomas A. Edison CTE High School, said, “It sounds good that the fare prices won’t increase but seeing is believing. Do you really think the MTA could go that long without increases in fare prices?” He made it clear that he wasn’t too sure of the MTA’s integrity.

Chelsea Reyes, a student of Thomas A. Edison High school, who takes the bus and train daily said, “I think the MTA withstanding from Fare hikes could ultimately add up in a lot of savings for those who have to commute to and from work and school/college.”

The price to pay for the subway rescue plan has had multiple facets. One of the problems that come with the plan is high amounts of expected revenue loss ranging from 5-58 million dollars. Despite this, Lhota was asked if he truly believes that the plan was worth all the trouble and money being spent and lost; Lhota had this much to say “…Is it well worth it? Yes. Because not doing it — the catastrophe that [not proceeding with the plan] would have caused would have been unbearable for the entire region over all.”