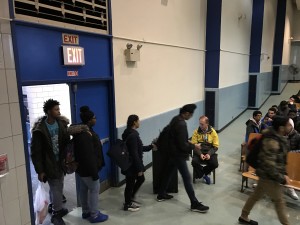 Late students arriving through the auditorium doors in the morning.

The project must be turned in today and you’ve spent all night working on it. You’re off to a late start in the morning, but finally, fight all odds to reach school with 15 minutes remaining in the period, 15 minutes to hand your project in on time, only to end up having to wait for the next period to start alongside a pool of fellow late students.

Edison students are all-too-familiar with such a concept. Everyday, many students are unable to make it to school by the prompt first period starting time of 8am with few coming as late as 8:30am. Although several students are unaware of the specific cutoff time, the school implemented the 8:20 rule for first period latecomers, in hopes of reducing classroom distractions and promoting an enriching learning experience.

When asked why such a rule was implemented, Mr. Engelson stated, “So going up to class more than halfway into the period would be viewed as a distraction to the class and the teacher; that is why they are not allowed up after the 8:20 cutoff.”

“It would benefit the rest of the class because they would not be interrupted and distracted from the student coming in; and would also hopefully encourage the student from stop coming late and learn their lesson. It shouldn’t be happening over and over again,” Engelson said. 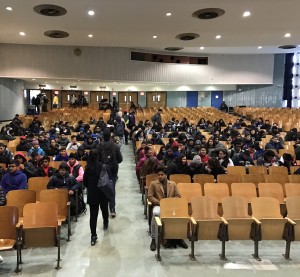 Ms. Mullings, a CTE teacher, put a different perspective to the effectiveness of the new rule saying, “It can be a little bit of a hindrance when they hold the kids first period and let them in second period. It’s only a good thing because this is a double period class so the kids don’t miss out on too much. But I usually teach the lesson first period so it’s a lot to catch up if you come second period.”

Ms. Mullings added, “I feel like the lateness has become more rampant due to the being held back and not let in first period.”
Though the 8:20 rule was originally implemented to deter lateness and reduce classroom distractions, it is evident that the true effectiveness of it remains a question of debate.

Hi I’m Samiha Mahjabin and I write for the General News Section of The Edison Light. I chose to write for this section because it allows me to report on a plethora of topics, in and out of school, including sports, entertainment, politics, and current affairs. In my free time, I am a forensic/crime investigation show enthusiast, cook, artist, traveler and photographer.