A very well known video game called “League of Legends” has hosted a live show where they invited 4 major American teams to compete in front of a large audience in Madison Square Garden. Tickets were sold online for August 23rd. It completely sold out in under an hour. This was to be expected from one of the biggest fanbase for a video game with peaks of over 25 million players signing in everyday around the world. 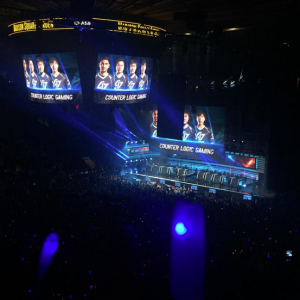 The viewing of these professionals games is known as eSports. Where professionals would play on a stage would huge monitors to show their view of the game. These teams will play for a prize pool that can range from a couple of hundred bucks, to hitting a prize of 1 million dollars. Usually the lower prize pool is hosted online where the content is streamed to many viewers around the world. Edouard Benipayo attended this event live in Madison Square Garden and said, “it was definitely an once in a lifetime experience.” Edouard was rooting for Counter Logic Gaming, which is a professional team that won this final. There are great supporters for professional teams, people will attend these performances live and hold up signs for their favorite team or ask for autographs from the team at the end of the game. Twitch.tv is a popoular streaming website that is open to the world and for free to the people for viewing. The total amount of views every day can add up to 10 million people. When a major event comes on, it is expected to have over 25 millions people viewing the tournament.

This is becoming a wild attraction and is great that we have something that many people equally enjoy. Your mother is probably questioning why you would spend money to watch a game. But it’s the same thing as spending money to watch sports games like basketball and baseball. This is part of entertainment that is greatly expanding each year by 10 or so more percent.