Say goodbye to ripped loose-leaf and heavy binders, smart notebooks can send your writing to the cloud. Companies like Moleskine, Wacom, and Rocketbook are making it easier to keep track of your pen strokes with scanning technology, whether you need to quickly share material online, organize your notes, or lighten the load in your backpack.

When it comes to students, Rocketbooks will probably their best choice. They look like any regular college ruled notebook, but can be scanned and sent to a storage service of your choice, including Dropbox and Google Drive. What makes the device stand out is its infinite reusability.

Kobe Collison, a senior at Edison with a smart book, attests to its utility. “I would often lose notes and not do well on notebook checks,” said Collison, who bought the Rocketbook in his junior year and hasn’t used a paper notebook since.

The integrated app allows him to choose a subject for storage like “Math” or “English” and save it to Google Drive for later use. “You do need to scan in the right lighting, and not all pens will write nicely on the glossy paper,” said Collison.

“It saves paper and space, and it’s always going to exist on the internet,” said Lenny Zavala, a senior who does not use a smart notebook, but a Microsoft Surface Pro to save his notes. When asked whether he sees it rendering traditional pencil and paper he said, “Absolutely, I already see the technology replacing paper.”

Roberto Ieraci from the Science Department agrees with the sentiment, but would like an even more integrated system, which would replace paper handouts. “I think all students should have iPads where they can write their notes and receive assignments electronically.”

Some students aren’t so passionate about note-taking, but are open to the idea of having a lighter backpack. “I don’t study my notes often, but it would take a load off,” said Freshman Lewi Gao.

Despite its simplicity, smart notebooks are a relatively new technology that challenges the status quo of the school binder and and and may improve students’ studying habits, as well as their backs. The Rocketbook is selling on Amazon for around $30 and maintains a 4-star score out of over 1,000 reviews. 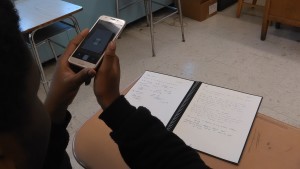