Breaks through the school year are looked forward to by the student body but these breaks harm the performance of some student-athletes. While many of us enjoy and are relieved when we have breaks others are impacted and not always in the best ways. One group of student-athletes that get impacted by the break are members of the wrestling team. Wrestlers need to maintain a certain body weight to fit into one of fifteen weight classes that permits them to wrestler against the weight class on the opposing team. The weight class is a safety measure to ensure there is no mismatch in the weight and have wrestlers around the same size range competing.

Gavindra Bhagwandeen, a member of the wrestling, said that before he started wrestling his daily life consisted of “ going to school, going home, and playing games.”

In addition, he described himself as being “pretty fat back then.” Being involved in wrestling he has noticed a big change in his body and daily activity but remember having a school break while being in wrestling, was “hell.” The school breaks didn’t affect his weight class but with the most recent winter break he said “ I was about 10 pounds over” and that it’s “ tough at the moment.” Being sick during a portion of the break impacted his eating habits and now he’s wearing layers and working out a lot more than he usually would to try and shed those extra pounds. In addition to that, he said “starving yourself the night before a match just to make weight.” 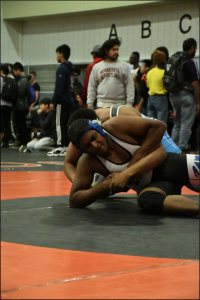 Gavindra Bhagwandeen on November 17,2018 at a tournament.
Photographer: Grace McNally

Another member of the wrestling team, Odesh Dhanpaul, said, “ weight didn’t change much”  but said he felt “way slower.” His strength felt the same but if he had not meant his weight class he would be working out a lot more and probably won’t eat food for a day.

A break is looked forward to, but days off impact wrestlers greatly and reversing these changes can be difficult and take a lot of work.