Alisha Cruz of the Edison Lady Inventors suffered a concussion from a soccer game half way through the season, and her fight to get back in before the end of the season was a journey.

According to the University of Pittsburgh Medical Center, 2 out of 10 of student athletes playing contact sports suffer concussions, and girls soccer comes in second place for the most student concussions right after football. Cruz was one of the unlucky athletes who suffered an injury when the team played against Beach Channel High School. Edison’s team won 3-0, but in the process Ms. Cruz was injured. 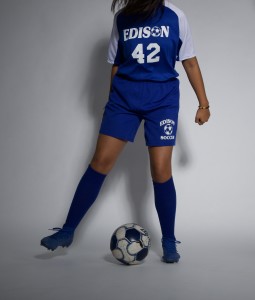 One player being injured affects the rest of the team. Cruz said,  “When one person isn’t there, the whole vibe is thrown off. It doesn’t matter if you’re a bench warmer or a star player, If someone is missing the rest of us  feel it.” With one person missing the chemistry is completely thrown off, communication can be rough when a new player is put in to replace someone else.

As a teammate and friend, It was easy to see the stress that was piling up on Cruz’s plate with her off the field. “I felt like I was being played by life… When I got my concussion and I wasn’t able to play my whole world came crashing down. Soccer is an outlet for me so when my outlet was taken away…it felt like everything else I had been battling came down on me at once,” said Cruz.

Being a senior in high school is stressful in and of  itself. College applications, SATs, and your future are all in the air, especially in the beginning of the school  year (when soccer season is in full swing).

Cruz made it clear that she knew people were looking out for her, but no one was inside her head, no one could feel what she felt. She felt perfectly fine.

“It was frustrating… I felt like I was being restricted of things I know I’m capable of…I felt like everyone was against me…I felt rejection and everything I had worked so hard for was crumbling down.” PSAL has strict rules for athletes who are injured to keep them safe, so getting back in after a serious injury is rare. It took Alisha almost three weeks to get to play again, it may not sound like much but the soccer season is short and with practice everyday and games every week it adds up.

While she was out of commission, Cruz made it a point to go to all of the teams games and keep her spirit there from off the field. “ Team sports are based on the chemistry of the team. Yes you need strong players, yes you need a strong defense… if a team doesn’t know each other and their  skill sets then they don’t know how to watch out for each other’s backs… At the end of the day we are the people on the field playing the game and we know how to trust each other.”

Eventually Cruz  was cleared and could play with her team again, playing a strong right wing for Edison’s defense. “Getting back on the field was the biggest wave of relief, but it came with an equal amount of nervousness… My nerves mostly came because I was afraid I wouldn’t be able to perform like I did before my injury. I was nervous about jumping back into the game and throwing off how my teammates played or not being 100%. In the end, I finished my season off well being surrounded by people I consider family.”

The girls soccer team went on to place third in their division, even getting into the playoffs. She doesn’t plan on playing soccer in college, but she loves the sport and was glad to be back on the field before the season ended.

My name is Grace Mc Nally and I am a lover of art. In the future I plan to be a filmmaker, so who knows, you may one day be watching my written words on a big screen. I love taking photography (especially self portraits) and have tried throughout high school to surround myself with as much culture and art as possible.