With the upcoming NFL season fast approaching, fans can’t help but contain their excitement. The cause of this excitement is the NFL draft. This is many fans favorite time of the year, as it gives hope to fans of “terrible teams” that better days are coming.

This year, there has been a tremendously inspirational story circulating around the football atmosphere. College football star, Shaquem Griffin has defied the odds and managed to get drafted into the NFL despite having only one hand.

This disability definitely didn’t hinder his success in college. The University Of Central Florida linebacker won AAC defensive player of the year in 2016 and was named a second-team All-American in 2017. 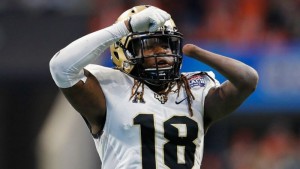 During the 2018 NFL combine Griffin stole the show, raising his draft stock exponentially, by putting up 20 reps on the bench press with a prosthetic right hand and running a 4.38 40-yard dash, the fastest time from a linebacker since 2003.

His story begins inside of the womb of his mother with his twin brother. In the womb, his mother’s amniotic sac wrapped around Shaquem’s wrist. Normally the doctors would go inside of the mother and fix the problem, but in this case, that was deemed too dangerous given the fact that there was another child in the womb. Therefore Griffin was born with amniotic band syndrome,  a congenital disorder caused by entrapment of fetal parts (usually a limb or digits) in fibrous amniotic bands while in utero.

Griffin was always in a great deal of pain. One day when he was only four years old, the pain became too unbearable so he went into the kitchen, grabbed a knife and attempted to cut his fingers off. Luckily his mom came in the room and stopped him. The next day she scheduled an appointment to amputate his fingers. From then on he would only live with one full hand.

With the support of his family, Griffin began to live a normal life and fall in love with football. Through hard work and perseverance Shaquem was able to get a football scholarship to the University of Central Florida, along with his brother. In his first three years he struggled to get playing time. But a change in the coaching allowed him to finally get on the field and show everybody how good he is. From there, he got invited to the NFL combine, where he made the most of his opportunity and dominated.

April 27th, 2018 Shaquem Griffin was drafted into the NFL by the Seattle Seahawks, the same team as his brother.