If you are an avid follower of the NBA, you are already well aware of who Kristaps Porzingis is. A few months ago many of us didn’t know he even existed.

With the fourth pick in the 2015 NBA draft the New York Knicks selected Kristaps Porzingis. Knicks fans responded with a backlash of boos and took to social media to further express their hate. In particular, there was one young Knicks fan that was seen crying on live television after the Knicks selected Porzingis. That same kid has now been spotted wearing his jersey. 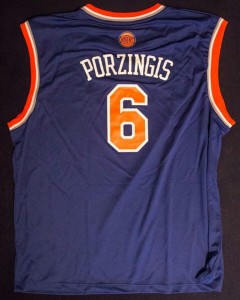 Kristaps Porzingis Jersey has become a favorite among many Knicks fans.

Why were Knicks fans upset? Simply because they never heard the guys name before. Knicks fans were accustomed to hearing about guys like Jahlil Okafor or Karl-Anthony Towns and how they would be the future of the NBA. The moment desperate Knicks fans heard an unfamiliar name they didn’t even bother to justify the decision of this pick.

Porzingis proved all of his doubters wrong within a few weeks after his professional debut. Porzingis stands at seven feet and three inches and is only 20 years old! What makes Porzingis extraordinary is that he has an outstanding jump shot and can drive to the rim quicker than any seven foot plus guy in the league. His rare mix of height, speed and range make him a lethal offensive threat. So far this season the rookie is averaging 17.9 points, 11 rebounds and 2.4 blocks per game.

Kristaps Porzingis is on pace to becoming rookie of the year, which Knicks fan would’ve predicted that back in June?