This year’s All-Star game in New Orleans is set to be on February 19. As the event is fast approaching, the NBA has announced a new voting system, hoping to end the previous, rather controversial, way of selecting players that would eventually start in the game.

For many years now, the NBA, players and some fans, have not been completely satisfied with the voting system used to determine, which players would be participating as starters in the All-Star game. Over the years, many people have come to the conclusion that the game has become a popularity contest. Popular, players are chosen sometimes Instead of individuals that have proven to be talented and appear to be leaving their sweat, heart, and hard work on the court.

A few years ago, Yao Ming, a player from China would always seem to find his way into the All-Star game due to the fact that many NBA fans from his country supported and voted for him. Those votes were more than enough to propel Ming into the game.

Just last year, Kobe Bryant, was voted into the All-Star game mainly because of his popularity, along with fans trying to honor his last year playing in the league. 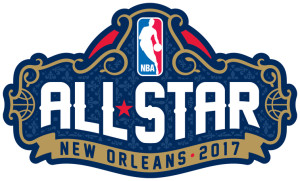 Official logo of the 2017 All-star game in New Orleans.

Even this year, Zaza Pachulia, a player that is not All-Star caliber based on his stats, led many talented players in the race. This was due to the simple fact that he was from Georgia and many of his people voted for him, similar to Yao Ming’s case.

“I think the new system is better than just letting fans vote because it’s much more fair to the players that actually deserve to be in the game, ” Senior Rahul Lall said.

With the new system, fans no longer have absolute power. Fans now get 50% of the vote. Selected media members and players share the remaining 50%, getting 25% each.

Gyu Hwan Choi, a player on the boys varsity basketball team believes that this new rationale will help make sure that players participating in the game are true deserving, All-Star caliber players.

Choi said, “At least now, I think the voting is fair, players that don’t deserve to be in the All-Star game will no longer take deserving players’ places.” This is a common belief shared by the NBA, players, many reporters, and some fans.

This year’s All-Stars have earned their spots on the team, which is supported by the stats they have put up since the start of the 2016-17 season. Although some people still believe there are some snubbed players that deserved to get in, we still have to keep in mind there are only 12 spots on the team. The new system is arguably not perfect, but it is definitely a step in the right direction.

My name is Efoe Attiogbe and I write for the Sports section of the school’s online newspaper. I chose to write for this section because I find joy in writing on sports related topics of any sort. Some of my hobbies include playing video games, watching and participating in various sports. My favorite sports teams are Real Madrid, the New York Knicks, Cleveland Cavaliers, and the Giants.