A game to preserve a winning streak or break the losing one. New York teams faced each other on January 25th, 2019 at the Barclays center. The Barclay center is the home of the Brooklyn Nets and another chance for the Knicks to potentially end their losing streak.The Brooklyn Nets have won multiple games in a row while the Knicks have not won a game. The Knicks seeming to be in a dry spell now faced their rival.  Starting off the first quarter of the game was very competitive with a consist back and forth keeping the game interesting to see who would be on top in the first quarter. The Knicks did out beat the Nets by seven points but that gives no guarantee so early in the game. Following into the second quarter it was still a competitive game where either team had a possibility to end with the lead for the first half. 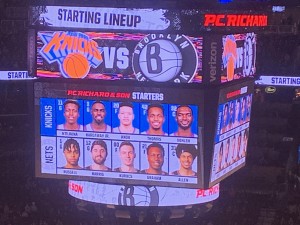 Starting off the second half the competitive atmosphere  felt in the first two-quarters of the game was diminishing rapidly.  It was no longer a back and forth of both teams but of the Nets overpowering the Knicks. They were more sufficient in cleaning up the plays and actually making their foul shots. The Nets had more opportunities at shooting because if there shot was made there were more rebounds being put back up or dished off for another attempt compared to what was seen from the Knicks in the offense position.

In addition, the Knicks had a difficult time making foul shots. For a majority of the foul shots only one would be made or none at all. On the other hand, the Nets were very efficient in making those foul shots count. Coming out of the third court the Brooklyn Nets had the lead and it continued into the fourth which gave the win to the Nets. Both teams were competitive and it looks to be a good match up. The Knicks did go cold here and there but they did put up a game alongside the Nets.