Belson Soccer Stadium, New York — Blood, sweat, and tears were spilled over the recent playoff games by Edison’s Boys Soccer team. The division champions reached the finals in the playoffs after 10 years of playing.

In the final, Edison played against Academy of American Studies. The team had really good chances as they attacked, almost scoring goals. Behind the midfield, the defenders remained alert to clear the ball from their goal.

“The deeper we get into this tournament, we’ve got to play more defensive,” said Coach Chris Zogopoulos.

The defense was set with players such as Anthony Vallejo and German Campoverde. Campoverde saved the team from a goal in the first half when he sprinted to a ball that bounced away from Larry Torres, goalkeeper. Campoverde appeared many times after to save the team and outran strikers from American Studies.

American Studies Eagles led the game 3-1 at the end of the first half. Striker Leandro Angulo  attempted 4 shots on goal but did not score. The referee called fouls for the Eagles and the Inventors, punishable with free kicks. When there is a free kick, the ball is given to a player of one team to kick because a player of the other team has broken a rule. 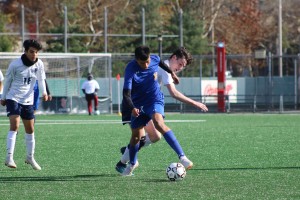 Johan Grande controlled the game as a midfielder, possessing the ball throughout the game and with accurate passes to the strikers. He attempted 3 shots on goal. Edison held their heads up in the game in the second half despite the score 3-1. More shots were attempted by Yosef Tamay and Captain Brian Rojas Hernandez.

“I just looked at my team and saw how I could help,” said Jack Tenesaca, a midfielder. “I looked at the ball, tried to do best and go for it.”

Rene Lopez, a sophomore with remarkable goals, played in the final for Edison. When he played in the midfield, alongside Johan Grande, he dribbled the ball through players and was tackled by them. In the second half, the Eagles’ defense attempted to take the ball away from him but Lopez beat them to the ball. 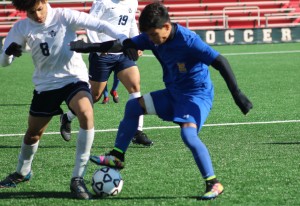 “Honestly that goal came out of my ass, I shot the ball just thinking about shooting and it went in,” said Rene Lopez. When he beat them to the ball, Lopez scored a long shot into the goal.

“He is absolutely one the guys you build a team around,” said Coach Chris Zogopoulos. “When I first saw him, I realized he’s special. He’s special and will become one of the team’s leaders.”

After missing most of the season due to injury, Christian Castro was one of the stars in the final for Edison as a midfielder. The game finished with a score of 3-1. It was a victory for Academy of American Studies, who were named final champions. Edison received second place, awarded with medals and a farewell speech from their coach.

Edison has fought over a decade against tough teams to rise up in the league. The last time Edison’s soccer team played in the finals was in the 2009 finals, losing the title to Queens Vocational High School.

The soccer team was positive about their season and success, especially seniors who played their last season for Edison. “It was a fun experience, these guys were fun. I always looked forward to practice,” said Johan Grande. “Season is over but it ended good. It was beautiful to me.” 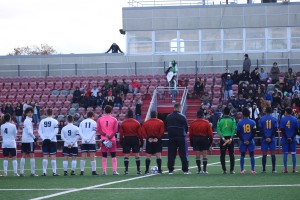