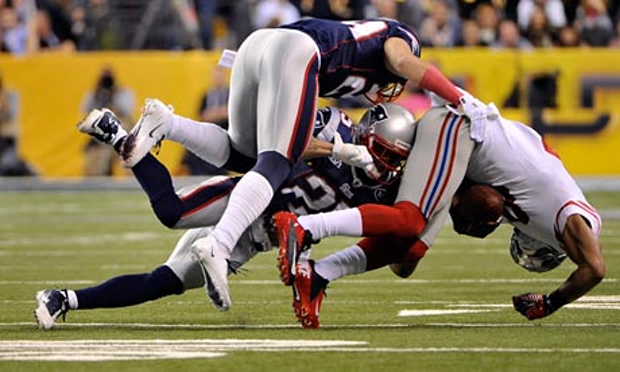 Players with helmets and padding’s throw themselves in ways they wouldn’t have without the protection.
Photo Credit: The Guardian

With their helmets and padding’s, American football players always look like they are ready for anything that can be thrown at them. And they certainly have better armour than their counterpart-rugby players around the world especially in the Britain and Ireland. But despite their impressively warrior-like appearances, how is it that football player’s accumulate more injuries compared to rugby players?

At Boston University, researchers have been studying the brains of sportsmen and women and soldiers who have had head injuries. Through their research they have found that head injuries can result in disastrous long-term problems including a degenerative brain injury, called chronic traumatic encephalopathy. In one of their researches that they conducted was a study of 35 former professional American football players where they have conducted medical examinations and found that 34 showed signs of brain injuries.

According to Jim McKenna, a professor of physical activity and health and a rugby coach at Leeds Metropolitan University points out that American football player’s tackle with their heads, butting each other in a way that is hardly ever seen in rugby. “They butt the opposition and their head is the tip of the missile, with an enormous body of weight behind them,” says McKenna. This can cause serious concussion and other head injuries, where the helmets and padding that football player’s wear can actually do more harm than good.

In contrast, rugby players who only have cushions covering their ears and temple of their head, accumulate less injury even though it is as intense compared with football. In a game of rugby, the player’s style of contact is different from football, where the players would continuously tug and push their opponents around in a big huddle, until a player retrieves the ball and runs it to the touch line. However, in football because of the big pads and helmets, players think they can launch themselves like missiles onto other players.

In addition to, in rugby, the players continuously play offensive and defensive roles with very few breaks. The players frequently need to conserve their energy. However, the stop-and-go nature of football means that players get breaks, thus can have more intense plays, and ultimately football player can literally put out 100% effort in every play which can result in harder hits.