Starting from the 2007 season, the NFL has began playing football games at Wembley stadium in London. The series; which consists of three games per season, has become known as the international series. The series intends to expand  the popularity of the NFL to the united Kingdom and can possibly result in a team relocating to London.

The increase of influence in the UK is a smart move for the NFL, expanding football beyond just the united states increases the size of the NFL fan base which in turn helps the NFL make more money.  How does it help the NFL make more money?  The Bills , Jaguars, chiefs and Lions have sold out Wembley stadium in back to back weeks when the tickets have sold for about 116$ each. Four of the worst teams in the NFL have sold out 2 games, something that can happen only in London. 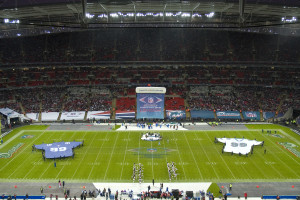 Wembley stadium prepares for a game between the Giants and Dolphins. Photo Credit: Gaspa

According to the NFL on October 24th , more than half a million people had showed  to its block party on Regent Street in London. It is quite clear that that there are many football fans in London, however what is the possibility that a team will be located there in the near future?

When asked about the possibility of seeing an NFL team in London by the year 2022, NFL International vice president Mark Waller said “it’s a realistic time frame, But there are still things we need to test for… We’re really focusing on the logistical and operational side .” he further went on to say that the NFL has a superb fanbase in London which he expects to grow int the coming years. One team to keep an eye out for would be the Jaguars, since many fans have been seen wearing Jaguars jerseys at the international series and because the Jaguars have played more games in London than any other NFL team.