Track and field began all the back to the Ancient Greece times, where the Olympic games were held. Some famous track players are Carl Lewis and Usain Bolt. Bolt was known for his great speed and quickness during the sprinting events in the Olympics games.

Whenever someone says the word superstars, the first thing that pops into almost everyone’s mind are the professional leagues, whether that may be basketball, football, soccer, or some other sport. Very few people bother to pay attention to the minor leagues and school-related sports organizations, as many believe that they are not good at the sport that they are playing. It is a sad, but true fact. This is a perfect example that shows that credit was not given where credit is deserved.

Thomas A. Edison CTE High School’s outdoor track team has many individuals who compete at the highest of levels and perform their best. These underappreciated teams should definitely be more recognized and be more under the spotlight. 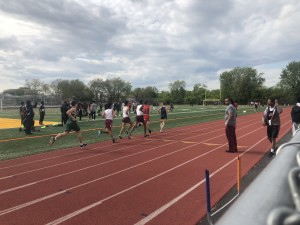 Coach Mark Delia of the Edison Outdoor Track Team had this to say about his outstanding team: “The athletes on my outdoor track team are young men of excellent character. They work hard during practice and they are willing to improve. They also help each other.” One thing that Delia admits that his team needs to improve on is “coming to practice on a regular basis.” Delia encourages newcomers to join the team by creating advertisements and telling all the benefits of joining. He also has the idea of having track members racing non-track members to help increase the interest of joining the team.

Daniel Bhopaul who is a member of the track team says that his team is the most serious one out of all the other sports. One of the most unforgettable things that Bhopaul claims to gain by being on the track team for almost three years now is the bonds and relationships that he has formed with his peers. He claims that “it is like a second family” for him.

Even though the school track team may seem insignificant at first, that is where you are wrong, as there is much more to it than it just being “another extracurricular activity.” You get to gain new and unforgettable experiences and skills that you can and will be able to use later in life.