Edison’s Baseball team recently ended their season with eleven wins and five losses. At the beginning of May, I was able to attend the first Edison vs. Hillcrest game. From multiple sporting events that I have attended this was an intense and captivating game. This game gave a good representation of the potential and competitiveness  of the Edison baseball boys. During this game the constant tension between both teams was tremendous with the runs being so close. At the end of the game Edison came on top closing with eight runs to six runs. For the first game Edison beat Hillcrest, but it wasn’t the same for the second game between these two rivals. 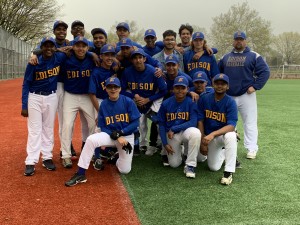 During the second game, Edison did not start off strong but definitely ended strong. The made a come back from being down more than 4 runs, but it wasn’t enough. At the end of the game Hillcrest beat Edison eight to seven. Overall, the Edison baseball team had a good season and made it into the playoffs.

During their first playoff game, the boys beat Automotive High School with a “No Hitter” leaving the score 21 to 0. For their second playoff game the boys unfortunately were hit with a no hitter themselves. Edison lost 16 – 0 to the Institute for Collaborative Education and that end their time in the playoffs. The boys ended their season with the second place spot in the league and showed what practice and dedicates can do after being in fourth in their league the past season.