Barry Bonds is joining the staff of new Marlins manager Don Mattingly as hitting coach. The hitting coach is the busiest person on a baseball team. If you see him in the pregame hours, he is almost always scurrying somewhere. Whether it be bouncing over to the video room to study swings on a laptop, ducking into a conference room to share scouting reports, or wheeling a cart of baseballs into a batting tunnel under the stands. 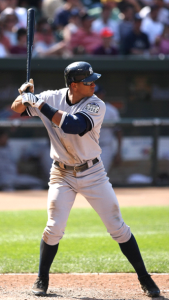 Person holding a baseball bat in the proper batting stance

However, this recruitment is very controversial, for Barry Bonds was once a steroid user, and many seem to think he may exhibit those behaviors to other players on the team. People think that he may try to influence players on the Miami Marlins to gain an unfair advantage on the playing field by using steroids.

Zaviel Young who is on the Edison baseball team said, “I can see what people may say about him, but he knows he can get into serious trouble if he intentionally tried to influence players on using steroids. If it came down to it, this opportunity he had been given is a second chance to get back in the action. He should not take this lightly.”

Zaviel also claimed, “However, I believe if our team was given a hitting coach who had past experiences with steroids, it would change how I viewed him. If he was good at what he did, he wouldn’t have need the steroids to begin with. I think that’s why many find it a bit odd that Miami hired him out of all people.”