The impact of media on our lives is very strong. Many people rely on the newer media to go about their daily routine. When wanting to acquire news information a person is more likely to look it up on their phones, rather than waiting a day or two for the daily newspaper articles to be printed or staying up late at night for the local news cast to report a current situation or crisis. New media takes current or recent information and forms conclusions providing input as well as creating memes. In addition to media, we are also dependant on our phones for other resources that they provide.

The phone is such an easy way to show and view the events going on around the world. A small on demand device would make everyone dependent on it. Checking my phone is important because my phone is a method of contact. People use their phone to communicate with people rather than meeting up with them in person.The general population today uses it not only as a way to connect with friends but also a way to show distant people updates of your social life. If someone dear to you moves away or someone wants to show you their travel experiences social media is a big help to do so. Not only social media but the phones ability to send picture messages from one device to another.

Even though we are so accustomed to checking our phones so frequently having them around benefits us. Some of the benefits include the Emergency SOS, emergency calling, google maps, finding your location, communication is easier, camera quality is better, apps and features can be used for just about anything. Gaming devices are also more advanced. Instead of walking around with a big device you have a small phone to hold by itself.

The cellphone is what I believe to be one of the most innovative devices. The amount of things that it can do only shows how technology has advanced. People no longer have to walk around with extra weight on their shoulders or worry about forgetting information. Storing it on their smartphones gives the a neat and easy access to their information.

“I believe that many people are dependent on their phones in today’s world. I personally believe that I too am dependent on my phone. If I have to go from one location to other, I often use my phone for navigation purposes. I check my phone constantly to see if I have received messages from my friends. Since we can check our email on our phones, I use it instead of my laptop or computer. Phones have made us their slaves due to the fact that we have become so dependent on and need them for everything,” said Anuj Shah, a senior at Thomas A. Edison High School. 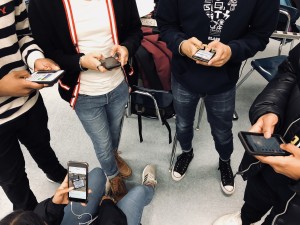 Caption: This photo shows a group of friends who are too interested with their phones to actually hang out and converse among each other.
Picture Credit: Rachel Rasul

“I believe there are many people that are dependent on their phone. The phone is an easy way communicates with others, making us dependent on it. I am dependent on my phone. I check my phone whenever a notification goes off. This is the fastest way of getting to me. Depending on the day, my phone usage would change, I would use the phone for about 5 to 6 hours a day throughout a week,” said Jiayao Dong, another senior at Thomas A. Edison High School.

Hi, my name is Rachel Rasul. I chose to write for this section because I am a very opinion based person. I feel everyone has a right to express their opinion. Also, sometimes it takes one person openly expressing their opinions for more people to get involved on the topic. I’m the type of person to express my opinion about how I feel based on how what I may see or hear affects me personally or the world around me. In a way, I always have to speak my mind.