While the majority of today’s youth discuss and poke fun at the headlines created by Donald Trump’s decision to run for president, millions of innocent people on the other side of the world are fleeing away from their own homes to save their last bit of hope for the future. Perhaps, if the media gave more coverage on the story behind the influx of Syrian refugees within Europe, students can become much more aware and charitable individuals.

It all began in March, 2011 when the nation of Syria, located in the Middle East, entered a civil war as national security guards opened fire on groups of protestors who were calling for more democratic reforms against their leader, Bashar al-Assad. Eventually, thousands began to oppose their leader and soon, violence erupted.

With the rise of chaos, new groups of political forces competed to govern the territory and along them came the infamous Islamic jihadist group, ISIS. According to CNN News, more than 200,000 Syrians have lost their lives within the last four years and 11 million others have been forced to move out of their homes. 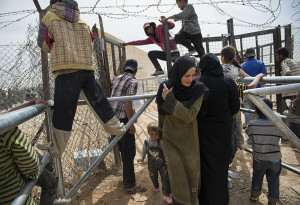 Syrian refugees leave a food distribution administered by the World Food Program and UNICEF at the Zaatari refugee camp in Jordan, April 7, 2013. Roughly 100,000 Syrian refugees live in the camp, and more arrive each day through official and unofficial border crossings between Syria and Jordan as the civil war in Syria enters its third year. The United Nations estimates that the number of Syrian refugees is currently over one million. (Credit: Lynsey Addario, for The New York Times)

Luckily, European nations like Germany, Hungary, Sweden, and Italy, have accepted an approximate amount of 200,000 refugees this year. Helpless refugees have been crossing the European borders in foot by traveling thousands of miles.

For instance, to get to Germany, families need to first get on plastic boats to travel from Turkey to Greece where drowning can be foreseen any minute. Then through rainstorms and windy whether, they need to be able to get to Hungary and continue walking until they reach Austria. From Austria, refugees either head straight into Germany or travel further away into countries like Denmark and Sweden.

Unfortunately, the European Union has not been prepared for an emergency refugee crisis this big that there is an apparent need for extra food, shelter, and medicaid for the newly arrived Syrians.

If one wishes to donate money to help the victims of the Syrian Civil War, the UN Refugee Agency has set up an online donation page at donate.unhcr.org where all savings will go towards providing aid for the Syrians. With just five dollars, you can help provide bread and water for one starving child who has inevitably lost his freedom of childhood as well as his right for proper nutrition. The fact that the average American family has access to three meals a day with a stable home to sleep at is very serendipitous compared to the refugees who live on two smalls meals a day and the streets to sleep on at night.