The people of New York are typically known for their peculiar and strange lingo that often tends to have a different meaning than what it really means – especially when heard by someone not of this region.

While walking down Times Square you are bound to hear something along the lines of  “It’s brick,” or even “I’m mad hungry bro.” Where “brick” actually has nothing to do with the rectangular block, but actually means cold or borderline freezing and “mad” refers to an immense amount of, or just places emphasis on the word that precedes it. Slang has become mundane for those who reside in New York; most use slang and don’t even realize it. 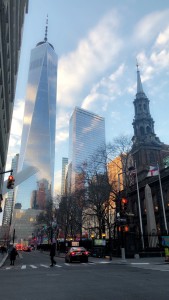 Caption: In such a fast paced, diverse city language is bound to evolve and change.
Credit: Sukhman Kaur

As language progresses and new words enter the mainstream, linguistic standards have become more and more irregular as mentioned by Britannica. Slang words are all that much more popular now due to platforms like Instagram and Snapchat that have only made it easier to spread and standardize these terms. Slang words can serve as new meanings for words that already exist, entirely new words, or abbreviations for words. The very informal, casual vocabulary can not only be found being used by teenagers, but adults as well. Some examples that have become increasingly popular in the recent years are tight, lit, selfie, cop, buggin’, trippin’, sus, and facts.

Clodine Lebrun, a student at Thomas A. Edison High School said, “Because of my peers in school, as well as my community, I am often exposed to slang, especially in the school setting. Slang is rather prevalent in the speech of those around me, as I see it used on on a daily basis… I believe that teens play a huge role in the prevalent usage of slang words within speech in modern society. Teenagers are the age group that are most easily influenced, more so affected by the current pressures of upholding appearances of society and discovering themselves as individuals. Thus, they would be prone to use speech that best reflects their character.”

So where does slang root from? As language evolves over time, new words and new meanings of previous words emerge as people come up with witty, or clever ways to express themselves.