What made your teacher want to become a teacher? What made them choose the subject that they wanted to teach in? When growing up, everyone has a class that they enjoy most; teachers are no exception. Normally, a person’s favorite class will either be about a subject that they are fascinated with or will include a mentor teaching in an astounding way that absorbs students and intrigues them not only with the class, but its work as well.

Robert Ferri was an American History, Government, and Financial Management teacher at Edison. He had loved stories, which is why he felt that history and English were his two favorite subjects. Robert Ferri felt that the two were similar because both were stories, the only difference being that history included real life stories, not just fiction. Mr. Ferri greatly enjoyed history and felt that it was a subject that could be related to everything.

The Truth About Teachers Illustration/Thumbnail photo
Art by Shreya Joeloemsingh

“I used to say it was my favorite subject because I was an egomaniac in the sense that I understood that I was alive right now today in this period of time, but everything that I am is because of everything that went on before me, so I wanted to know absolutely everything that got to this moment that I am in and understanding where you came from certainly makes you prepared for where you’re going to,” said Robert Ferri.

“I had a wonderful history teacher and that really, besides enjoying history even growing up, that really gave me a passion for history and I took five classes over my three years in college classes there with the same professor… I had folders and folders of notes. I read every book assigned and from that point forward I knew that I wanted to be a history teacher and the education part came along with it,” said Justin Stark, a former student of Queens College and current AP of our History department.

In both high school and college, English was Jason Fishedick’s favorite subject. He had liked to read and found it an easy to write papers. Mr. Fishedick had always been a good writer and looked for an easy way out in high school. In college, he had taken a creative writing class where his teacher had been very critical of Mr. Fishedick’s work and challenged him to do more unlike other professors. Using some of the methods that this teacher had used in his classroom, Mr. Fishedick modified them to best fit into his own classroom and help his own students. He used the stories of embarrassment involving his grammar to make his students care about it the same way he did. He hopes that these tales will help his students avoid embarrassment from professors in the future. 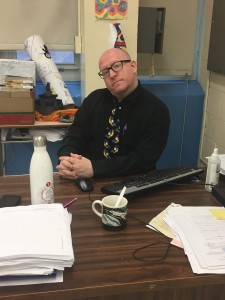 “If you told me in college I was going to be a teacher, I would have laughed at you. It was not my plan or intention,” said English and government teacher, Jason Fischedick. “…after college, I didn’t know what I wanted to do and I made a list of the top five people who were influential in my life and four of them were educators…I became a teacher in the hopes that I could help guide teenagers who need guidance like I did when I was younger.”

Andrew Ferreira is a science teacher at Edison who teaches Science Engineering, Urban Farming, and Physics. On top of teaching students, Mr. Ferreira also teaches a professional development for teacher’s class so that they can incorporate technology in their classrooms and lessons. Mr. Ferreria is very big on how everything works in the not only the body and nature, but also the universe in its entirety. He has a wide variety in science studies ranging from things like coding in computer sciences to how drugs make the human brain react in biology.

“There is a lot of science denial in the public realm and I felt that I could make a difference by trying to teach people in schools, like the young adults, about how science plays a role in life and how to interpret science and science information and hopefully have them develop into better, informed citizens,” said Mr. Ferreira, “The classes inspired me to become a teacher in that I really wanted to teach the country as a whole including the citizens and my students specifically how to better understand science and apply that into their public life and their daily lives.”