Looking for something to do the day or week of Halloween? Well look no further because Fright Fest is going on in your area.  Fright Fest is an event that goes on every year at Six Flags that includes haunted attractions, “scare zones” and live performances. This event is located in Six Flags, New Jersey which is about 1 and a half an hour away from New York and is easily accessible by the Port Authority bus. 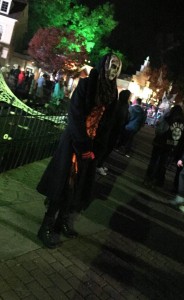 The monster is just standing casually awaiting his next move.

Fright Fest is going on the whole day, when the park opens at 11am. Events at the beginning of the day include; “thrills by day” which is 11am – 6pm that has; comedy shows, magic shows, a display of underwater animals, safari tours and a trick or treat trial for the younger children. Children aged up to 12 years old may wear a costume without a mask and can participate in costume and scream contests.  The “fright by night” starts after 6pm and shows scarier zones including; terror trials, haunted mazes and more than 100’s of zombies, Halloween theme shows and attractions. 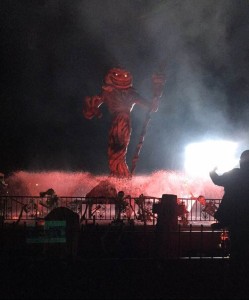 A view of the amazing attractions made for Fright Fest.

Mother of one, Rebecca Goodman had mentioned: “This is my first time coming to Six Flags Fright Fest ever and some of the monsters have even scared me. I had only gone here in the first place because my daughter wanted to go but it was pretty fun for me too.” Her daughter, Madylin Goodman also said; “This is my favorite time going to Six Flags ever! I love all the monsters, scary rides and even the costume contest.”

The month of October is an experience at Six Flags that is unforgettable since new characters are appearing, scarier themes are being created and it is more screams than the regular theme park. You will be faced by not just frightening roller coasters, but also zombie and monster scares. The theme park transforms into a fright-filled setting that will keep you on your toes all night.

Since the month of October is almost over, visit Fright Fest while you still can in the last week of October and first day of November! Be sure to buy your tickets soon because tickets may run out. Be face to face with your biggest fears—if you dare! 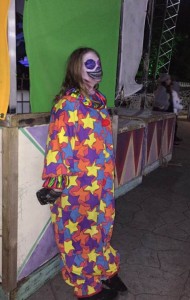 One of the creepy clowns that are waiting on their next victim to scare.