Hundreds of Palestinians protested against Trump administration on December 8, 2017 in Times Square. This protest was provoked by Donald Trump’s words on December 6. Trump’s announcement of misinformation as fact triggered many people. Jerusalem is actually the capital of Palestine and stating otherwise is adding fuel to an already serious conflict in the region.

This is a violation of international law and a huge setback to any hope for peace. Palestine is a country where Muslims, Christians and Jews lived side by side for centuries, yet have been fighting to be recognized since the inception of Israel in 1948. In his speech yesterday, Trump never once mentioned Palestine, but referred to Israel and “the Palestinian people’ as if Palestine never existed.

Jerusalem is and always has been the capital of occupied Palestine. Declaring Jerusalem as Israel’s capital is a calculated move to make Palestinians lose hope of ever gaining statehood in their own country, and many people hearing this, are not only angry and frustrated, but are extremely hurt as well.

Roaa Ayoub, a senior at Thomas Edison High School, attended this protest  in support of her beloved country, she said, “This is a sad day for every Palestinian. Jerusalem belongs to the Palestinians. What Trump said, has insulted and hurt every Palestinian out there. I felt like we took five steps back when this happened, and that it will definitely be harder for my family back home to live in peace. The treatment is unfair, one-sided and should not be tolerated! I stand with Palestine, and my heart is broken into many pieces knowing my home has been taken away from us.”

Hosts of this event said that this declaration gave Israel license to expand its settler-colonial project more rapidly and violently, but it will not continue unchallenged. The fact that Trump made this announcement only further shows the harsh reality and the lack of basic rights with which Palestinians are struggling. 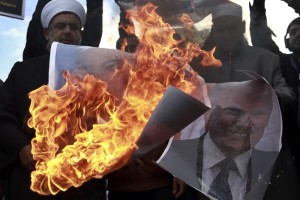 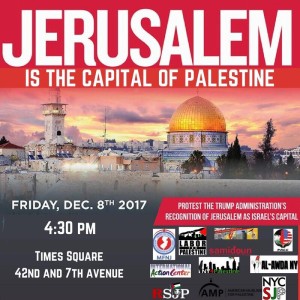 Official flyer for protest, posted by the Palestinian Community Center in the public ​​Facebook page “Emergency rally: Jerusalem is the capital of Palestine” on December 6, 2017.

Bonjour! My name is Samiha Aktar. I take Web Design as my CTE course and love watching unique documentaries along with reading realistic fiction books. I like to be aware of what events are occurring and hope that the features section of our newsletter will help you to be more acknowledged of what’s happening around you too!