Nicholas Bhurasingh and Julio Pineda competed at the New York State Automotive Technology Competition and took home first place. Representing New York, they moved on to the National level which took place on March 29th, 2016 at the New York International Automobile Show at Jacob K. Javits Convention Center. At the contest, the team of two students were expected to diagnose and repair a number of preassigned problems under a car’s hood within an allotted amount of time. The bugs to be corrected are each worth a certain amount of points based on the difficulty along with points earned from written tests that are prepared by the ASE.

Mr. Sierra said, “I don’t doubt that Nicholas and Julio will make us proud at the GYNADA competition as they have proven their knowledge on autobody technology in the state competition already.” They have been practicing endlessly with their instructor Mr. Sierra, solving mock situations and finding bugs in car. In addition, they worked with certified technicians at a local franchised automobile dealership. Nicholas Bhurasingh confidentially said, “I feel ready to take home another win for Edison. “ Julio Pineda also said, “I’m feeling pretty confident, our instructor trained us very well, prepared us very well for the last two rounds of the competition, so hopefully we do pretty well in this competition too.”

Just as predicted, the team excelled and placed 8th in the nation for this competition. Although they didn’t bring home gold, they still hold the title of the best mechanics in New York State and among the top ten in the nation. 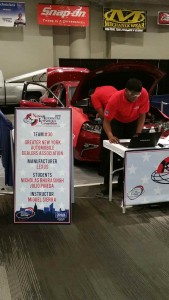 Competitors Nicholas Bhurasingh and Julio Pineda at their work stations.

Competitors Nicholas Bhurasingh and Julio Pineda at their work stations.