The United States’ president, Donald Trump, has been making bold decisions in taking action for our country. However, his decision to launch a bomb has caused many to speak upon the upheaval he has caused.

Donald Trump has been making decisions, where he was found abusing and violating his executive power. These actions were recognized by many important figures; one of which is Nancy Pelosi.

Nancy Pelosi, an American Democratic Party politician and the Speaker of the United States House of Representatives, is well known for being strongly opinionated when it comes down to current events dealing with the United States. She has been following up on Donald Trump before the missile launching, while in the process of his impeachment. Pelosi feels that Trump’s decisions only drive the public eye away from the impeachment trial occurring during this specific time. 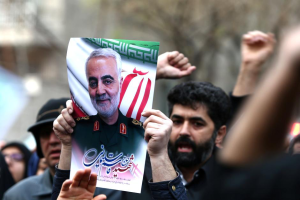 On January 03rd, Donald Trump ordered an airstrike against Iran containing a bomb, killing General Qasem Soleimani. This has caused many Iranians and Americans to speak on the topic., leading Iranians to voice the idea of offering $80M on Trump’s head. Iranians are angered due to General Soleimani’s death caused by Trump’s unjust action. They want revenge on Trump, recognizing  how valuable it would be to take away the life of an American President.

“If Iran were to take stronger measures on attacking the United States, New York would definitely be a target,” expressed Arayana Khelawan. Due to its large population, New York is one of many potential targets.

“Iranian’s idea of putting $80M puts us all in danger. We are in this situation due to Trump’s poor decision-making skills. Killing a general and a very well-respected figure, was an extreme measure that should’ve been discussed thoroughly, before taking,” Kehalawan said.

Mrs. Zafar, an immigrant with deep roots in her Iranian background, reflected on how she felt, being that General Soleimani was an important figure for her family in Iran, as well. “General Soleimani did not deserve to pass the way he did. He only did his part to protect his people, just like any logical leader would do.” General Soleimani’s death has indirectly impacted her being her family is still in Iran.

“Trump stated that he will be prepared for danger coming our way, but what about my family? My entire family lives in Iran… If they were to pass away if a war breaks out, it would only make matters worse and put many families’ blood on his hands,” said Zafar.

Mrs. Zafar’s extended family are from Iran, a place where they recognize it as “home.” “Putting $80M on Donald Trump’s hand will put Iranians in danger.“

Donald Trump’s mindless actions were a cause of $80M on his own head. He began something that must have an end, only to make it fair for all sides of this situation. There are many individuals having multiple perspectives, most of which voice his actions are logically unjustified.

My name is Angie Gonzalez and I am a junior student st Thomas A. Edison CTE High School. I am enrolled in a journalism class where I have learned various styles of writings surrounding the use of creativity. It has helped me create poems in different ways to express myself. Furthermore, my shop class is Computer Repair, where I hope to take my career into once I graduate in the spring of 2020.