With this year coming to an end, it will not end quietly. Throughout this entire year there have been many new games released which have been nominated for game of the year. These nominations include big game names such as God of War, Red Dead Redemption 2, and Spider-Man. However, there is a really big game changer this year known as Super Smash Bros. Ultimate which will only be available for the Nintendo Switch. 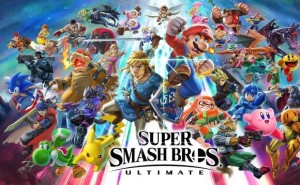 Finally we make our way to 2018 with Super Smash Bros Ultimate coming out on Friday December 7th. There were new features introduced with the promotional trailers as well as actual gameplay shown during the Nintendo Direct Videos. They have added a new mode called Adventure mode, as well as another new feature called spirits. Not only have they added these new features, but this is also the largest amount of characters and maps they have ever had. They have a roster of 74 characters total, as well as a grand total of 103 different stages that you can play on.

Adventure mode is basically a story mode for Smash Ultimate, and I won’t give any spoilers for it. All I can say is *Thanos snap*. Final smashes, the ultimate move of any character has become shorter that way players can get straight back into the action. Spirits are exactly what they sound like, it’s the spirit of another character that will give your character a boost in stats, and you can equip different ones based on the different situations you are going to be in.  Well that’s basically all that they introduced into the game so far that we know of, and you can be sure that there will be a follow up when the game finally comes out.