The most anticipated return of AMC’s gruesome and graphic apocalypse show, has fans buzzing as they come back for their 8th Season. The Walking Dead left off Season 7 with some unfinished business in terms of the allies and enemies created.

A rollercoaster of emotions, between characters that have gone, and conflict among the two main groups, leaves fans with anticipation of wanting to know what’s going to happen on the next episode. The show has had its long run, with it’s popularity. The constant edge of your seat and anticipation leads fan to watch weekly, with its plot twists, and constant curiosity of whose character is gone next.

“The suspense and thrill each and every character progresses in the series is what get’s me watching it every week. It can go either way when it comes to what obstacle they face whether it be a hoard of zombies or another troublesome group,” said 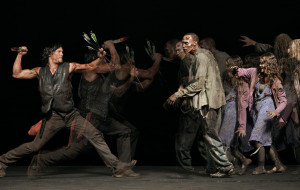 The war still continues, but not against zombies.

The current situation between the main character Rick (Andrew Lincoln) and his group that he has led so far, is in a dilemma with The Saviors’ ruthless leader, Negan (Jeffrey Dean Morgan). Ever since the horrid death of two main characters, fans have been upset and been keeping up with the episodes just to see what happens with him. Rick and the rest of the group have faced all types of people, but as of right now, many can argue that it doesn’t compare to Negan. After war broke out between the two as well as other allied groups, in the middle of the conflict, it continued as soon as the new season started.

This proves to show that “walkers” (zombies) are the least of their problems as of right now. Yes, they are a main concern, but you mainly see man vs. man conflicts. “The show’s been going on for some time and you would expect it to get boring, but the truth is…they always switch it up. In some episodes you see a different character’s situation, which makes you want to watch it even more just to see what happens to them. There are also times where you won’t find out what happens to a character for another two weeks,” said senior, Varsha Singh.

Many fans have picked up on similarities between the show and the comics  and predict that the way it ended in the comic books, will happen on the show. However, some fans have different ideas.

Hi, my name is Alejandra and I’m a part of the Arts and Entertainment section. I enjoy listening to any type of music and with this section I’m able to fill everyone in on the latest movies and TV shows.