A letter of solidarity was sent by 700,000 female farmworkers to a legion of Hollywood actors, including Anne Hathaway, Cara Delevingne, Emma Watson, Jennifer Aniston, Jennifer Lawrence, and several others. Their mission addresses the harassment women that work for television go through. Activists have said, “change from women in entertainment [is] for women everywhere. From movie sets to farm fields to boardrooms alike, we envision nationwide leadership that reflects the world in which we live.”

They want to reform the justice system and the inequality it has within it by improving employment regulations, changing laws and lowering the rate of harassment. A legal Defense Fund has been made that people can donate to as well. The goal is to reach $19.5 million, which will be automatically housed at and administered by the National Women’s Law Center, an established, national women’s rights legal organization. A network of lawyers and public relations professionals across the country will work with the Center’s Legal Network for Gender Equity to provide assistance to those ready to stand up. 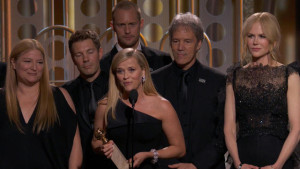 Roaa Ayoub said,”I am happy that public figures are taking advantage of their popularity to help real issues. Females have been treated horribly since forever, and it needs to stop! I am tired of this, and so I wonder how actual victims of abuse must feel.”

Riann Mars agreed when she had said, “I’m glad there is a focus on this issue now. I feel like women have always been sexually abused, and the fact that they work for television does not stop people from targeting them. If anything, women are always called out to be attention seekers if they defend themselves and state how they were abused. So this is really cool in fact.”

If you too wish to take part in the movement, founders are stating that you can by donating and/or putting your foot forward when someone is being bullied.

Bonjour! My name is Samiha Aktar. I take Web Design as my CTE course and love watching unique documentaries along with reading realistic fiction books. I like to be aware of what events are occurring and hope that the features section of our newsletter will help you to be more acknowledged of what’s happening around you too!