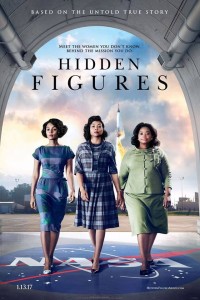 Women have always been doubted of their abilities since the beginning of time. Katherine Johnson, Dorothy Vaughan, and Mary Jackson are three women who faced discrimination, but in the end came together to accomplish one of NASA’s biggest achievements, John Glenn’s launch into the orbit.

Taraji P. Hensen (Katherine G. Johnson) , Octavia Spencer (Dorothy Vaughan), and Janelle Monae (Mary Jackson) took on the roles of three African-American women who assisted NASA with the launch of Astronaut John Glenn into orbit around the Earth. These women use their mathematical and science skills standing out among other male employees at NASA.

The movie depicts gender and race issues women faced within the walls of NASA during the 1960s.The plot of the movie also showcases the Space Race and briefly explores the theme of Russian spies in the United States at that time.

Viewers like Senior Badhan Barua enjoyed watching the movie and were satisfied at the cast’s performance. “Taraji P. Henson, who portrayed Katherine Goble Johnson, stood out the most to me with her acting. The expression she gave was pure and realistic that it seemed as if she was Katherine G. Johnson herself,” Barua stated.

Barua said, “The friendship between the three women and how they didn’t give up even though they were prejudiced for being colored woman in a male dominated field.”

The actors in the movie had such good chemistry and were best suited at each role. Teena Persaud said, “It was a true inspiration to see how these three women overcame both racist and sexist boundaries. Being doubted of your abilities is challenging for everyone, but in a time like the 1960s it must be especially hard.”

This movie is inspiring to colored women and is a must see movie! It needs to be watched by people everywhere to see that anyone regardless of ethnicity, race, or gender can achieve anything they desire.

My name is Gurneet. My hobbies include listening to Kpop as well as watching makeup tutorials. I write for the Arts and Entertainment section of The Edison Light because of my love for movies and music.