With Nintendo’s server crash, to the addition of Joker, Super Smash Bros. Ultimate is looking like it’s going to live up to its name of being Ultimate.

When update 3.0 for Super Smash Bros. Ultimate went live on April 17, 2019 many fans were confused as to why they were unable to actually enter or launch the game. In fact, none of the online services for Nintendo were working at all. The reason for that is simple, they had the 3.0 update planned ahead of time, however they also had to do a server maintenance; the server kept switching back and forth from releasing the update to completing the maintenance. This lead to a deadlock between the two, which in turn caused Nintendo’s entire server and network to crash. 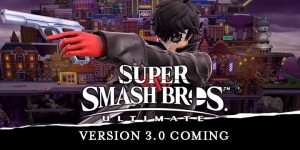 The nightmare and hype of update 3.0

Now this didn’t even end there, as fans woke up the next day hoping to use the new character and features, they were greeted by a screen that said that they were undergoing a maintenance which lasted for almost the entire day. This is what was known as the nightmare of update 3.0, but there were still issues that happened after the update was finally released.

Sure the game went through a lot of changes, such as character balancing, however this is nothing compared to how they just straight up added a new game feature, that they leaked purposely through ads. The feature I speak of is none other than Stage builder, which calls into question, should players be given the power to do whatever they want within the game without any regulations whatsoever.

Kobe Collison, a senior at Thomas Edison High School, has said “Nintendo shouldn’t have given us this power of creation, and soon they will realize why. And once they do, they will do whatever they can to get rid of it, but it may be too late by then.”

After hearing this, I launched stage builder myself, at first it wasn’t so bad. That was until I entered the user created section, where people who have made their own stages can share it publicly online for others to download. It was indescribable as to what I saw. So now the question is, with 3.0.1 update around the corner for Super Smash Bros. Ultimate, will they strip the players of their power, or will they add strict regulations?