On Saturday, January 13th, 2018, there was a limited one-night performance of the Distant Worlds: music from Final Fantasy live orchestra at Carnegie Hall which I had been able to attend. The Distant Worlds Philharmonic Orchestra and the Dessoff Choirs preformed hit songs from the Final Fantasy series that were written by composers Nobuo Uematsu and Yoko Shimomura under the direction of the Grammy-winning artist, Arnie Roth.

The Distant Worlds concert was held to celebrate the 30th anniversary of Final Fantasy and featured HD cinematic videos to accompany the orchestra as they played songs. With a comfortable atmosphere, a flawless musical display, and a great direction; the Distant Worlds orchestra had an outstanding performance that I would recommend to any fan of the Final Fantasy series or of orchestral music. 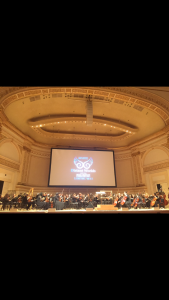 The concert started off with a simple, welcoming wave from Arnie Roth towards the audience and a swift movement of his hand to start the orchestra into playing the prelude theme to Final Fantasy.   Once concluded, Arnie Roth spoke a brief introduction to himself and key members in the audience, such as Nobuo Uematsu and Yoko Shimomura.

“It’s about time we started introducing more things from Final Fantasy, right? So, on our thirtieth anniversary we thought we would bring you Cosmo Canyon from Final Fantasy 7,” is all Roth had to say to start off the main segment with a roar.

This is because Arnie Roth kept the audience in suspense. No one knew what would be played that night other than the Orchestra and staff members. Although it was an unexpected approach upon arrival, it was a brilliant aspect that kept the audience on the edge of their seats whenever a set ended. As soon as the set was complete, Arnie Roth announced the songs that would be played next as he was met with extensive clapping and shouting of excitement. This would lead into the cinematic starting with the cue of the orchestra and the crowd became silent in awe of what they were witnessing that night. 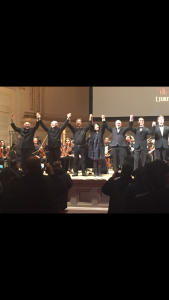 Distant Worlds hosts and guests after the concert; hosts and important members of the audience, such as Nobuo Uematsu and Yoko Shimomura, stood on the stage and took a bow before the audience.
Photo Credit: William Burgos

After the main introduction, the concert went on smoothly as each set started and ended. After several sets, the concert moved into intermission where the audience was given another chance at access to the gift shop with merchandise available for purchase celebrating the thirtieth anniversary.

The second half of the concert held up just as strong as it did at the start with persistent applause from the audience after each song ended. At the end, Arnie Roth and Nobuo Uematsu wanted to conclude the concert with an audience sing along to one of the more well-known songs in series, One-Winged Angel from Final Fantasy 7.

Although the concert in NYC has concluded and was an extremely limited event, there are still shows playing throughout the world until the tour’s end on May 3rd, 2018 at Denver Colorado. The orchestra was truly a sight to behold and I would recommend it to any fan of the series or orchestral music.