Marvel’s Black Panther takes place in the secluded, yet technologically advanced nation, Wakanda. The film showcases strong woman leads, equal intelligence between both genders, and cultural appreciation throughout the film. The cast and director of this film out-did themselves, making this movie a must-see. This movie has earned over $520 million globally in its first seven days and $320 million domestically.

T’Challa, also known as Black Panther (Chadwick Boseman), may have executed his role perfectly, but Erik Killmonger (Michael B. Jordan) stole the show; Jordan’s drive to fight for what he believes in and his histrionic actions allowed his character to stand out and steal the audience’s hearts. The film starts off with King of Wakanda, T’Challa (Chadwick Boseman), rises to the throne in an isolated yet advanced African Nation. But his power was soon challenged by an enemy, Eric Killmonger (Michael B. Jordan), who was a victim of T’Challas’ father mistake. With the help of his bodyguard Okoye (Danai Gurira), his lover Nakia (Lupita Nyong’o) and other intelligent warriors T’Challa gains power to find a defend his nation.

In interviews with Ellen DeGeneres, Michael B. Jordan stated that in order to prepare for his role as Killmonger he had a strict diet and exercise regimen. Jordan stated that he would “workout two – three times and eat six times a day just to stay fit for his character.”

Director Ryan Coogler has out done himself with this magnificent display. Coogler is now one of Marvel’s youngest filmmakers and is already being connected to the biggest directors in Hollywood. Costume designer Ruth Carter also did an amazing job with modernizing the costumes, but also keeping it culturally respective.

This film celebrates black culture on many different platforms. The portrayal that Coogler gives of Africa is much needed since Africa is often portrayed as backwards and heavily chaotic. 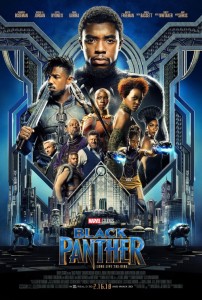 My name is Chanell and I write for the sports section in the school’s online newspaper. I chose this section because I find pleasure in spectating games and giving my readers a chance to visualize what’s happening. My favorite sports to watch is basketball, volleyball and football. My favorite sports team is Chicago Bears, Golden State Warriors, and Boston Celtics.