Entering week 11 of the 2018 NFL season, the Washington Redskins had a pretty good record with six wins and three losses. So far, with this great performance by the Redskins, they are first place in the NFC East division, beating the New York Giants, the Philadelphia Eagles, and the Dallas Cowboys. Even though everything seems to be going well for the Redskins, that may no longer be the case after what happened in the game against the Houston Texans.

The incident that occurred during the third quarter of the matchup was so bad that the Redskins may no longer be able to have a chance at playing in the playoffs and the Super Bowl. The Redskins may now suffer a lot of losses, due to the fact that they lost one of their star players: Quarterback Alex Smith.

This game is crucial for the Redskins because if they win, they will be able to keep ahead of their fastly approaching division rivals: the second place Dallas Cowboys in the NFC East Division. The end result of the was that the Redskins lost to the Texans with the score of 23-21. Losing the game was not the only thing that the Redskins lost from this particular matchup. The Redskins lost their star quarterback Alex Smith in the middle of the third quarter, due to a sack by Texans’ defensive players J.J. Watt and Kareem Jackson. This left him with a broken fibula and tibia in his right leg.

Many Redskins fans are now concerned with the future of their precious team. A Redskins fan from Thomas A. Edison High School, Ganesh Ramcharan said, ”The future of the Washington Redskins seem pretty bleak. I believe that Colt McCoy will not do a good job being the substitute quarterback, which will lead the entire team to face a number of losses. From now on, Alex Smith will be healing and benched for at least a year. Even though he has made a ‘full recovery,’ Smith will not be the same nor as good as he is now.”

As Smith was carted off the field, players from both teams wished him well and hoped that he would have a speedy recovery. All that the Redskins could do now is look straight towards the future, hoping for many more wins to come, instead of mourning the lost of Smith in the past. From now on, Colt McCoy would be the quarterback and it would be rough sailing for the Redskins. 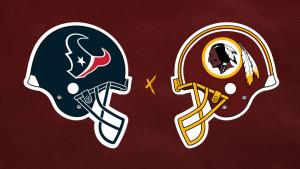 Week eleven in particular crushed the hopes and dreams of many Washington Redskins fans.
Credit: www.redskins.com