Randall’s Island, New York — Leandro Angulo touched the ball and kicked the ball to striker Alexander Muyudumbay. Brian Rojas Hernandez, the Inventors’ captain, tracked them from the midfield. Tension clouded the field as the ball danced in and out of Edison players, who relentlessly ran for it.

“This season we stressed a lot about position oriented game marking and communicating. We want to dominate our opponents and have more possession in the game,” said Captain Rojas. 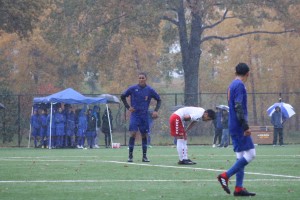 Rain showers fell all day at Randall’s Island, but because there wasn’t thunder or lightning, PSAL officials did not stop the game. In the first half, John Dewey was leading Thomas Edison 1-0. The referee called a penalty on Edison’s side when defender Anthony Vallejo slide tackled a Dewey player, bringing him down as he raced toward the goal.

Slide tackle refers to an attempt to tackle the ball away from an opponent while sliding on the ground. A sliding tackle is not in itself foul play; however, it is illegal to use excessive force. The penalty was given to Dewey and it was a goal.

Rene Lopez made a remarkable play when he dribbled past Dewey’s midfield. The defense attempted to take the ball away but Lopez outran them. Dewey’s goalkeeper risked his goal, running out of the box to save the ball. Lopez dribbled through the goalkeeper and scored an open goal.

As central midfielder, Johan Grande controlled the game by opening up to the defense and offense zones. Dewey’s goalkeeper, Chris Fernandez, blocked the ball in a corner kick which bounced to Johan Grande. Grande headed the ball into the net, scoring another goal for Edison.

Edison Inventors led the game 3-1 at the end of the first half. Striker Alexander Muyudumbay attempted 3 shots on goals but did not score. The referee called a handball by one of Edison’s players resulting in another penalty for Dewey. 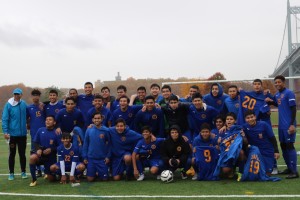 Larry Torres grew up playing as a goalkeeper for Woodhaven F.C. for 6 years and aspires to be a professional goalkeeper.

In the second half, John Dewey High tied up to Edison in a 4-4 score. In the final minutes both teams desperately tried to score. Edison’s chance came when the ball was kicked to the midfield with Edison’s Johan Grande and Dewey’s defender sprinting toward the ball. Grande kicked the ball past Dewey’s goalkeeper, breaking the tie.

The game ended with Edison winning the semifinal 5-4. Edison’s soccer team successfully made it into the finals after a decade.