For many student athletes your sport can consume your whole life. “I’ll study in the morning” turns into “That project’s way too much work” and quickly you’ve failed off the team. Issues of student athletes failing have always been a problem. Jocks have been stereotyped as idiots who pass classes just because they are on a team and want to play in the big leagues. Students who don’t want to pursue a career in their sport can get lost in the adrenaline and be put in a tough spot when it comes to college admissions.

Ulaan Hyder is a senior on the Thomas Edison wrestling team, and has been a member since he was a freshman. Practice for wrestling is everyday a week from 3:30 to 6:45 or 7, and that doesn’t include Saturday tournaments, which can be from 7 in the morning to 7 at night. “In the beginning of the season I was working 5 -10 or later. My grades went down drastically because I was so tired, not to mention my ability as a wrestler was terrible when I had no energy.” Ulaan eventually quit his job and has been able to go to practice full time, ending his season undefeated in duel meets with a overall record of 20 wins and 6 losses. 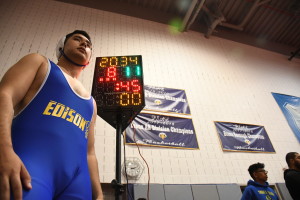 Ajay Nair, the captain of the Edison baseball team, explains how it impacts the team when a student ‘fails off’. “Our star player failed 3 classes and was suspended until he brought his grades up. We ended up losing the next 3 games and missed the playoffs”. Whether it be a star player or a supporting athlete, a missing player can drastically alter the balance of a team. “As a student athlete you get home around 7 or 8 and you have a lot of homework (especially from AP classes). Teachers don’t understand that you get home late and you get overwhelmed.”

Just last year Maspeth High School, a school known for their superb athletics,  was thrown into hot water when teachers revealed that coaches had pressured them to pass students who didn’t deserve the grade. According to “Maspeth High School’s secret to high pass rates is cheating: Teachers” by Susan Edelman “‘You are called in about kids who are failing. The message is, ‘Make sure you pass them,’ a teacher said. ‘You know you have to change the grade.’ ” This situation is so common in Maspeth it has become known as the “Maspeth Minimum.”

When a student athlete flunks out of their team they lose their stress outlet and some lose their chances at college scholarships. Not only that but their team has lost a member, no matter how great they are this impacts the team.

My name is Grace Mc Nally and I am a lover of art. In the future I plan to be a filmmaker, so who knows, you may one day be watching my written words on a big screen. I love taking photography (especially self portraits) and have tried throughout high school to surround myself with as much culture and art as possible.