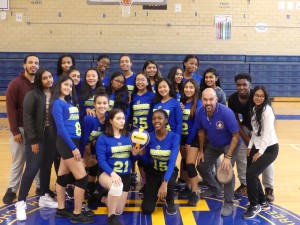 Speculations that the Edison Girls volleyball team would enter the playoff where high due to having a 5-5 record that provided them with an equivalent of .500 points that was  enough to enter a team into the playoffs in other sports like in soccer for B division teams. The points are determined based on the wins a team obtains.

Robert Ferri, the coach of the girls volleyball team, said he felt, “ disappointed because the girls had work so hard and done so well and knew they could’ve, should’ve, would’ve,” in regards to the playoffs.

In addition, he felt that missing one of his best players affected the outcomes of the final game that could have given them the above .500 score, but does a credit the team for playing well regardless of missing a key player. Although he felt disappointed because the girls worked so hard and it was “so close, so exciting,” he looks forward to the following season.

Captain of the team Corine Houngninou a member since her freshman year describes the 2018-2019 season to be there best season so far.  “ When I was a freshman we lost every game of the season and last year we got a little bit better, we started winning a little bit more but this year not only have we won more games but also like the team has become a lot stronger as a whole,” said Houngninou.

Playoffs were an “inspiration to work harder the whole season.” After they “started winning their first few games,  if we keep this we’ll make playoffs ” was the beliefs of Cornie Houngninou and of the girls on the team. Ms.Houngninou upon knowing that the team hadn’t qualified for playoffs felt “ angry” and “disappointed” She believed “that yeah you  can win a lot of games but when you tell the school you’ve made the playoffs it seems more of an achievement.”