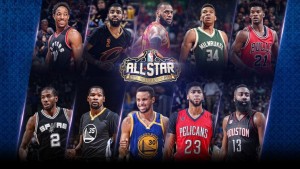 It’s that time of year again! With the end of the first half of the NBA season right around the corner, it’s time for the players and fans to celebrate and rejoice. A part of All-Star Weekend that generates interest is the All-Star Game itself. This imminent game has the chance to be a very high-scoring game, perhaps the highest ever. First, let’s review who’s playing in this game, starting with the players from the Eastern Conference.

Kyrie Irving (CLE) – Averaging 24 points, 6 assists and shooting 46% from the field, Kyrie Irving has really emerged as a capable co-star in Cleveland, alongside LeBron James. This will be his 4th All-Star appearance.

DeMar DeRozan (TOR) – Averaging 27 points and a career-high 5 rebounds, DeMar DeRozan has been sensational for the 3rd seed Toronto Raptors. This will be his 3rd All-Star appearance.

LeBron James (CLE) – In his 13th straight All-Star appearance, he’s averaging 26 points, 8 rebounds and 8 assists. He also happens to be the all-time scoring leader for the All-Star Game at 291 points.

Giannis Antetokounmpo (MIL) – This young stalwart is making his first All-Star appearance this year and he’s got the stats to back it up. With 23 points and 9 rebounds a game, he becomes the first Buck since 2004 to start in the All-Star Game.

Jimmy Butler (CHI) – In his 3rd straight All-Star appearance, this will be his first time starting in the game. He puts up 25 points and 5 rebounds for the Bulls.

Now, let us head to the Western Conference.

#13: James Harden (HOU) – James Harden is second in triple-doubles in the NBA. He’s averaging 28 points, 11 assists and 8 rebounds for the Houston Rockets.

#2: Kawhi Leonard (SAS) – Leonard has been improving since he started in the NBA. In his 2nd straight All-Star appearance, he’s averaging 25 points and 6 rebounds for the San Antonio Spurs.

#23: Anthony Davis (NOP) – Being the hometown hero isn’t the only reason Anthony Davis is starting in the All-Star Game. He’s averaging 28 points, 12 rebounds and he’s shooting 50% from the field.

I find it interesting that Russell Westbrook isn’t starting in this game. His weighted score was exactly the same as Curry and Harden. Given that he’s put up over 20 triple-doubles, it makes you think about whether or not the lineups would’ve been different. Other notable emissions from this game are Carmelo Anthony (NYK), Damian Lillard (POR) and Mike Conley (MEM).

Another aspect I find interesting is the frontcourt. Antetokounmpo and Davis are starting for their respective teams. I like that the center position has made a resurgence in the All-Star Game. Golden State and Cleveland have dominated this game in terms of selections. They have a combined 7 selections in the All-Star Game.

Hello, I’m the Editor for the Sports section of The Edison Light. I’ve been a fan of sports, particularly basketball, since I was 4 years old. I regularly watch shows like First Take and Undisputed to see the opinions of others. I also find that I learn something every day from watching experts. I’m a huge wrestling fan, mainly WWE, but I’ll watch a show from a different promotion every now and then. I believe that if you delineate figure skating and golf as sports, professional wrestling has to be a sport as well.