Francis Lewis, NY—Riley Perera, an Inventor, shifted his body on the mat to face his opponent as the match began. Edison’s boys wrestling varsity team pin and win their way to playoffs for the first time in 3 years. The Inventors defeated the Patriots with a score of 46-40, rising to second place in Region 7.

Gabriel Torres lost in a 126 lb match, giving Francis Lewis 6 points. Nicolas Perez Romero lost in a 132 lb match as Francis Lewis wrestler defeated him by a fall. In the 138 lb match, the Inventors were down when Keoni Peters was defeated. John Aguaiza Mayance was pinned in few minutes and lost in the 152 lb match.

Kevin Hernandez, Justin Henry, and Brian Lo all defeated the Patriot wrestlers by fall. A fall is when a wrestler brings their opponent down to the mat and pins both their shoulders to the ground long enough for the referee to count. Riley Perera gained 4 points for Edison after a major decision result. Orlando Lucero entered the mat and broke through his opponent’s defense constantly. Despite some nosebleeds, Edison was able to gain 6 points.

Redwan Aurpon won his match amid much suspense and the audience celebrated as 6 points were gained for the Inventor’s side. Edison broke the tie of 40-40 and the Patriots fell as the final score was 40-46. Edison’s wrestling varsity was coached this year by Luis Castillo. The new coach has created a team of fierce wrestlers who held a record of 6-1 in just his first year. In the final game, he relentlessly coached his players from the sidelines.

Edison hustles onto the playoffs and will compete against James Madison High School in the Bronx.

“It’s tough but in the end it’s worth it,” said Brian Lo, a senior wrestler. “ You see the improvement within the team.” 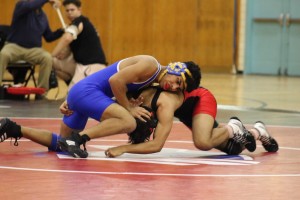 Edison’s wrestling boys varsity and Coach Castillo celebrate their victory and have a record of 6-1 this season.