“Bed rest, plenty of fluids, chicken soup, and sleep” are the remedies Patricia Musial, one of the principal’s secretaries said that can cure the flu, but with the dominant flu strain, H3N2, that might not work anymore.

The 2017-2018 flu season left people devastated by the number of deaths the flu caused. An estimated 80,000 people died, making it the highest death count in decades. Scientists have studied four flu strains for the past six months and concluded that H3N2 influenza A is the most severe flu strain at the moment. Influenza is a contagious infection in respiratory passages that causes severe aching of the body and fever. With the rapid evolvement of the flu every year, it’s safer to get the shot.

Paula Koch, one of the principal’s secretaries, said that “It’s important to get just to prevent any certain strains from coming through.”

People can form complications from the flu without even realizing it. Sarah Bisram said, “When I have the flu I usually use Vicks for like everything.”

Many people believe that using home remedies can solve their symptoms, but it can actually make things worse. The most common type of complication from the flu is a bacterial infection or pneumonia in the lungs that could potentially lead to death. It could also make breathing harder for children causing their bodies to not get enough oxygen.

Injecting your arm isn’t the only way to get the vaccine in your system. FluMist is the nasal spray version of the vaccine and it’s just as good as the shot. The formula has been enhanced to become a better immunity from the flu. It is recommended that people between the ages two to forty-nine years old are eligible to get it.

Getting the flu shot doesn’t guarantee you from getting sick. There is a chance that the flu strain that researchers created the vaccine out of isn’t the correct virus at the moment. Causing people to not be completely immune to the flu. It takes about a week for the vaccine to fully work. Even after it does kick in, people can still get symptoms related to the flu like a runny nose and a cough.

The flu virus has evolved throughout the years. Getting the flu shot will eliminate a lot of death and despair from the world. 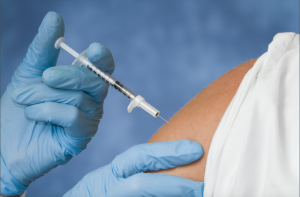 The flu shot changes every year and is recommended for everyone to get.
Credit: AZP Worldwide, Shutterstock

Hi, I’m Safeeya and I write for the opinion section of the website. I chose the opinion section because I like to be open minded and hear about peoples’ opinions on all topics. I want to inform others about the different thoughts and ideas that are all in our school.