A “competition” has been going on in instagram about a picture of an egg to reach over 18 million likes against one of Kylie Jenner’s photos. Many people don’t really know who started all of this but who knew that an egg would become so famous all over social media? With the amount of chaos that’s going on around the world, an egg got so much recognition. It really caught many people’s attention and it even led people to make merchandise about it. Social media has really gone far and who knows what pointless idea will come along in the future.

The person that created this basically wanted to set a world record and many people decided to join in so the egg actually did receive the most likes which is surprising to some people. Now that this world record exists, Kylie Jenner’s picture is filled with comments about the egg instead of being about herself. When she noticed the world record egg account, she decided to post a video of herself cracking the egg as “revenge.” This situation got so far ahead, people even decided to create merch such as T-shirts, hand bags, hoodies, and much more, all just for an egg and now it’s probably famous all over the world so other nations might be selling  this as well. 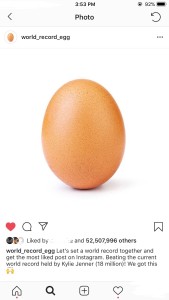 “This issue is absolutely not beneficial since it doesn’t even bring good cause to the world that has much more chaos going on since it truly has no meaning to it,” said Zahia Hassan, a senior at Thomas A. Edison CTE High school.

Even though the picture got over 19 million likes now, there are many people out there that didn’t join this world record and Zahia’s one of those people. “I just wish social media could point out the worst situations going on out there all over the world instead of wasting a lot of people’s time,” said Hassan. She didn’t expect that something like this would actually happen all over social media.

People have different point of views and think much more realistically rather than worry about something that’s very pointless. “I believe there could’ve been something else that might’ve set a world record and can actually benefit people that are struggling all over the world,” said Rishab Pal, a senior at Thomas A. Edison CTE High school. “Instead they could’ve pointed out animals that are becoming endangered or the amount of homeless people out there that actually need a home right now, especially since it’s winter,” said Pal. Because of this world record, we might actually not be surprised in the future if something like this actually happens ever again on social media.

The world has so much more relevant news that should be recognized than just an egg getting more attention. Many people don’t realize how pointless this “competition” truly is. This might’ve been a fun idea for some people but in the end, a lot of people got bored with this world record since it was just an egg, which is something that many of us eat. Eggs are probably in now a days for some people all because of this world record coming to an exist. This egg even led people to creating other world record accounts for other things such as a world record account for a black egg and other ideas as well. Who knew that an egg could also be a trendsetter?

My name is Suhana Shelley. I write for the opinions section and I like the ideas of many controversial topics to share the opinions I have. Learning new things is what interests me so I also enjoy hearing other people’s opinions as well to broaden my mind.