Many were traumatized by the tragic terrorist attack that occurred in New Zealand. As a result the people of New Zealand along with others around the world have showed their support for the victims and their families.  Although they showed their support in many ways, there was one teenage boy who showed it in a very unique way to say the least. Despite the fact that there are some questioning the boy’s actions, many are more concerned with the fact that the senator was immature enough to continue fighting with the boy.

Will Connolly, the teenage boy who hit the senator with an egg is now famously known as the “Egg Boy.” Connolly took matters into his own hands during a press conference with the senator. He decided it was only right that the senator was hit with a egg for his lack of sympathy for the victims. 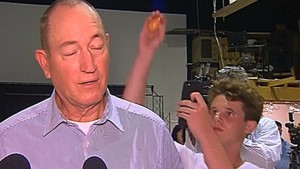 Will Connolly in action, hitting the senator with an egg.

During senator Fraser’s speech he blatantly blamed Muslim immigration for the terror attack at two mosques in New Zealand that left 50 people dead. Although hitting a senator is the last thing anyone wants to advocate during a time like this, many were baffled by the senator’s speech and felt that the senator had it coming

Despite Connolly’s actions being widely praised, there were consequences for his actions. He was forced to limit his activity on social media and was not allowed to accept the money made from the Go-Fund me that was funded to help cover his legal fees. He was told that it was not permissible for him to profit from a “crime.” Connolly was favored so much that people raised 50,000 Australian dollars for him, however Connolly requested that the money was given to help the families of the victims. Nevertheless, the money was indeed given to the victims as well as the families of the victims.

Admittedly, Connolly getting physical was not the solution to calling Senator Fraser out on his ignorance. In spite of the fact that Connolly can not take back his actions, he can reflect and think of how he should have reacted to the situation. He could have used peaceful means such as a petition to remove Senator Frazer from office. Nevertheless, despite Senator Fraser’s wrongdoings, Will Connolly should not have hit him.