Just when we were enjoying the nice weather in December, Mother Nature decided the hit and gave us a snowstorm. It impacted 85 million people along the east coast and resulted in 30 deaths. This blizzard broke records in New York being the first time a single storm dropped more than two feet of snow. New York received almost 30 inches but public schools were still open on the Monday after.

The Department of Sanitation was working endlessly to get all the streets plowed. However the abundance of snow still posed a problem for commuters. Many people were stuck in traffic due to the backup on highways and major roadways. Also public transportation had many delays due to the snow and traffic. 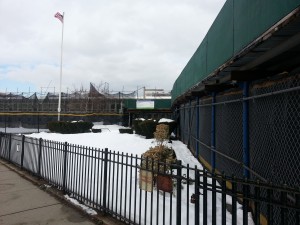 Edison covered in snow after the storm.

So, why was school opened on the 25th? The mayor urged teachers and students to use mass transit or car pool to reduce the amount of vehicles that would be on the road. However he also urged people to stay off the streets and leave their cars parked so that the cleanup would be quicker. But even on Monday, many streets still weren’t plowed making it a dangerous condition for individuals to come to school.

“I didn’t expect it to be this bad. I live closer than the rest of the staff and I knew we were going to be shorthanded so I came to school,” said Ms. Stathakis.

Likewise Kanwarvir Randhawa said, “I wasn’t able to drive to school due to the hazardous conditions. There was a lot of traffic and I was 20 minutes late.”

Many teachers and students were absent causing classrooms to have little to no students in attendance. The educational impact of a school day is gone if no child is there to learn. However it seemed that Mayor de Blasio didn’t take this into consideration. He believed that you couldn’t just close school in one borough and not the other so he decided to keep schools open.

As Mr. McKenny said, “Considering the monetary expense of having the schools open with so little students, it’s not worth having schools open.”

In preparation of the next snowstorm, take the Mayor’s advice and stay off the roads. When the commute to school seems too dangerous, decide whether or not to come to school. Just keep in mind that there will be other students and teachers that won’t be able to make it.