On Tuesday, January 3rd, Governor Andrew Cuomo gained some major appeal with many New York teenagers after unveiling his plan to make all CUNY and SUNY colleges tuition-free for middle and low-income families in the near future. 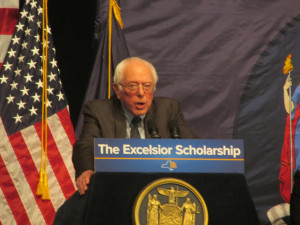 Standing in front of a packed auditorium at LaGuardia Community College, Governor Cuomo brought both adults and teenagers to their feet when he explained his initiative to allow students of families who make $125,000 or less per year to go to a CUNY or SUNY for free. He explained that most career opportunities in states like New York are only offered to applicants holding a college degree and that this new program will allow those who would have otherwise been at a disadvantage, to get a leg up.

“This society should say, ‘We’re going to pay for college because you need college to be successful,’” Cuomo said.

The governor also pointed out that one of his primary motivations for this new initiative was the fact that many students left college in at least $30,000 worth of debt.

“It’s like starting a race with an anchor tied to your leg,” Cuomo remarked.

The program is set to begin in the fall, with a three-year trial period. However, one thing that might affect how many people will benefit from this plan is the fact that it begins with a $100,000 income limit, which only increases to $125,000 by the time it is fully enacted in 2019. This means that families making over $100,000 and less than $125,000 can only qualify for free CUNY or SUNY tuition in 2019, when the program is fully accepted.

As a first generation American teenager from Guyanese parents, I have many strong views. By writing for the Opinions Section, I hope to be able to not only convey my opinions but that of others in a respectful manner. As a part of Edison’s Model United Nations class, it is my passion to help others get their voices heard. I hope that by writing for this section, I am able to empower people to not be afraid to express their opinions.