The technology age has yielded teenagers who are addicted to their cell phones. However they have to forgo the use of their electronic device when they are behind the wheel. With many students getting their permits and licenses, as well as starting to drive, the texting and driving laws may be a big problem for them to avoid. 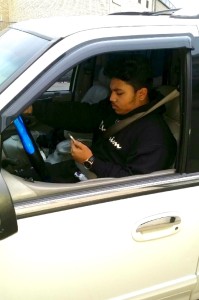 Even though the law forbids the use of a cell phone while driving, many people still do it under the assumption that they won’t get caught. Also, many people are unaware of the consequences associated with this violation.

Fines for this offense range from $50 to $450 upon multiple offenses. There is also five violation points added to your license if you are caught using your phone. Junior drivers also have some consequences as well; they can get their license suspended for 120 days or a revocation of their license for a year if there is a second conviction within six months.

Brandon Surujbali stated, “I believe that this law is being enforced well as to where if you are caught, you face the charges the officer fines you. Consequences such as paying up to $200 might not be a wakeup call to some people, but revocation of their license for a short period of time might suit the case. Don’t do the crime if you can’t do the time.”

The cell phone laws and repercussions were implemented to ensure safety and prevent deaths. It’s a matter of focusing on the road and driving rather than being distracted. At the end of the day, that text or call can wait. If it’s necessary pull over and use the phone.

Nadira Khan said, “I feel like as drivers we feel that we can multitask when we really shouldn’t. This law shows everyone that safety should come first. We are to realize that driving isn’t a right, it’s a privilege.”

Remember the next time you decide to use a phone behind the wheel what the consequences can be.