There has been an average of one mass shooting per day in America since 2013. In 2019, there were 417 mass shootings resulting in hundreds of deaths and injuries, according to the Gun Violence Archive. What is the reason? If you ask some, the answer is violent video games. For years, there has been a supposed relationship between those who play violent video games developing aggressive behaviors and some even perpetrating atrocities, namely mass shootings.

Even the American Psychological Association and American Academy of Pediatrics advocates against children and adolescents engaging in violent video games. Many agree that there is a link between violent video games, mental health, and mass shootings but is there a scientific basis to these claims?

President Trump may be totally missing the mark. According to a statement from the American Psychological Association, only a small subset of the population experiences a rise in aggressive feelings after playing violent video games.

Russell Shilling, chief scientific officer at the APA affirms that there is a difference between aggression and violence and that being aggressive does not inherently make someone violent or dangerous. Patrick Markey, director of The Interpersonal Research Laboratory, states, “While over 70% of high school students play violent video games, only 20% of school shooters have reported playing these games” (CNBC). This statement notes that only a small percentage of all school shooters actually engage in violent video games. 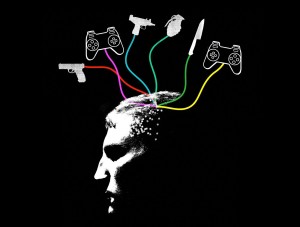 There is no clear cut answer to why mass/school shootings happen. There are many theories and beliefs, with one prevalent one being that exposure to violent video games leads to school shootings. There is no scientific evidence to corroborate this claim and many believe that the causes are numerous factors far beyond violent media. This leads one to ask what the true cause of school shootings is, for which there is no answer.

My name is Cyrah. I am in the A+ Computer Repair program as well as MOUSE Squad and the National Technical Honor Society. I love computers and technology, and after I get my IT Fundamentals and A+ Computer Repair CompTIA certifications, I intend to further study computer science and engineering in college while also maintaining a job as an IT Technician part-time at the entry-level. As I continue to learn more in the IT field, I hope to be able to share the knowledge I gain with others and helping them learn more about the field as well.