Scroll to Top
Christmas has not become too secular. Yes, technically it’s a Christian holiday. However, December in America today is a time to spread a message of good cheer by reuniting with family and friends, and it need not have anything to do with the religion. To many atheist and agnostic humanists, this time of year transcends religion and deities, which is why it is enjoyed not just by the most faithful but by all who appreciate goodwill and community. Anyone can celebrate and participate in the traditions of the season, including giving gifts, hosting parties, and spending time with family and friends. In fact, many people take this opportunity to recognize America’s diversity by celebrating not just Christmas, but Hanukkah, Kwanzaa, and Winter Solstice celebrations, among others.
Those on the Religious Right claim there’s a “war on Christmas” and insist that only Christmas be celebrated publicly and only in their distinctly sectarian way. That only fuels further intolerance of Americans of minority faiths and philosophies who enjoy this time of year and recognize Christmas and other December holidays for what they truly are a time for peace and giving, getting together with family and friends, and celebrating humanity. This is not to say that Christians can’t enjoy a sectarian Christmas of their own, though it’s worth pointing out that many Christmas rituals and practices we observe today have ancient pagan roots and a long history of accepting adaptations from various cultures. But there’s no doubt Christmas today has become a civic holiday that can be celebrated by all and that’s a good thing. 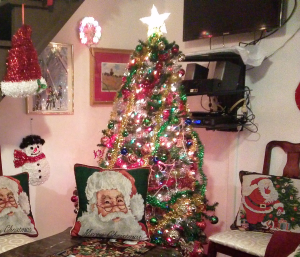 I interview a Professor Ramcharran. She said, “Christmas in America is a universal holiday and is celebrated by everyone. I am Hindu, but I still have a Christmas tree in house with presents under it. People may still believe that Christmas is secular because of the fact Christians say it’s the birth of Jesus Christ. When I celebrate Christmas I call over my family and we exchange present. Also, we share memories when we were young.” To sum up Professor Ramcharran point of view, she feels there’s nothing wrong with celebrating Christmas even though you aren’t Christian.
Not only is Christmas perfectly acceptable and enjoyable as a secular holiday, I would go so far as to say that Christmas and religion are at functional odds. At its most practical, religion is a way of making sense of and coping with the world. We can only guess what it means for our futures, post-life, but we can certainly see what it does to the world we live in. Christmas, on the other hand, is pure escape. And then, when it’s over, it’s back to real life.
Share This