Climate change has been quite an issue for some time now. We can see our ecosystem failing, with drastic heat in the summer and early winters. Even though the government says they will do something, not much change has occurred. 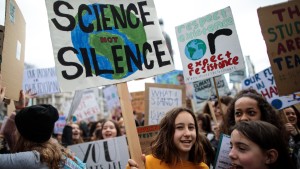 Many people, such as Greta Thunberg, have been active and influenced others to join her in the fight for environmental preservation. Thunberg received attention by “…skipping school on Fridays to protest in front of the Swedish Parliament.” She organized a worldwide strike on September 20, 2019 so that young people may also have their voices heard.

In New York, students got an excused absence by the Mayor Bill De Blaiso to participate in the strike. Students got on top of police cars and created posters to show that they believe that change needs to occur now.

Jarod Perarai, a student at Thomas A. Edison High School, was one among the thousands who were in the strike. He said, “Not many people show any attention to this situation. We see it all around us, warmer winters and darker nights. Soon, we won’t be able to live in this world without an oxygen mask.”

It’s a shame how our elders think that we take this as a joke, this isn’t just for We can also see that many running presidential candidates are including climate change as part of their political ideology. Schools are now teaching the younger generation about ways they can help the environment. Together, we can help make this planet green again.

Hi, I’m Ria Varghese. I love to travel, hang out with friends, try new foods, and watch my favorite shows.