Trump’s scandals finally catch up to him as the possibility of impeachment threaten his presidency. Although his scandals vary, the one that put him on the stand was the Ukraine call, commonly referred to as the “Ukraine gate Scandal” in reference to President Nixon’s Watergate scandal which led him to Impeachment and Resignation. 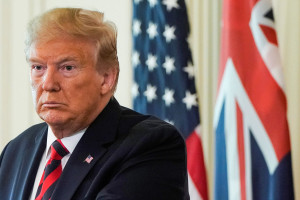 The call took place on July 25, 2019, but did not reach the public’s attention until mid-September, which only happened because of a whistle-blower complaint made in August.

The Ukraine Gate Scandal refers to a call President Trump made with the president of Ukraine, Volodymyr Zelensky. President Trump pressured President Zelensky to investigate his political rival, the  former US Vice President Joe Biden as well as his son, Hunter Biden. Trump made it clear that the release of military aid to Ukraine would all depend on if Zelensky’s decision regarding the investigation of Joe Biden and his son though he denies this.

Records of this call were moved to a classified system instead of being released to public archives where all call transcripts are supposed to be stored. Trump claimed that the call was just a congratulatory call meant to celebrate President Zelensky’s election, but the whistle-blower complaint said otherwise.

When the controversy grew, Trump promised to release the complete and fully declassified transcript. However, the released transcript consisted of abridged notes of the call and not the full thing. The summary of the call did show Trump urging Zelensky to investigate and pull up “dirt” on Biden, which is very much against the law.

Democrats have since launched a formal impeachment inquiry into the whole affair. They have spared no time and expenses in trying to find the truth. However, there is a lot of confusion as to how Impeachment works. If a president is impeached, it doesn’t necessarily mean he is no longer president.

Impeachment refers to the filing of formal charges. The impeachment system is a long process that involves all of Congress, the House and the Senate. It starts in the House of Representatives, which is currently controlled by Democrats. The House files to impeach which they will vote for. A two-thirds super-majority vote is needed to successfully impeach a president.

The Constitution states that a President can be impeached for “treason, bribery, or other high crimes and misdemeanors.”  When the House successfully impeaches a president, the claim is then moved to the Senate. The Senate is currently controlled by Republicans. The Senate votes to either convict or acquit the president for his “formal charges.” If convicted, they are removed from office but if they are acquitted, then they will remain in office.

Trump has been abusing his power and doing things unfitting of a president. He has made his bed and our government and its system will decide if he deserves to lay on it. The first hearing took place on Thursday at 10 a.m. ET. The Impeachment hearings will continue going strong with a lot of heat and tension. Although this is causing significant turmoil, it has to be done for the future of our country. To decide if the man leading our country should continue leading or should step aside for his actions.

Hello my name is Muktadir Reza. I aspire to be a professional journalist and I enjoy writing poetry. I plan on being an active member of the Edison Light and write relevant and interesting articles, hopefully.